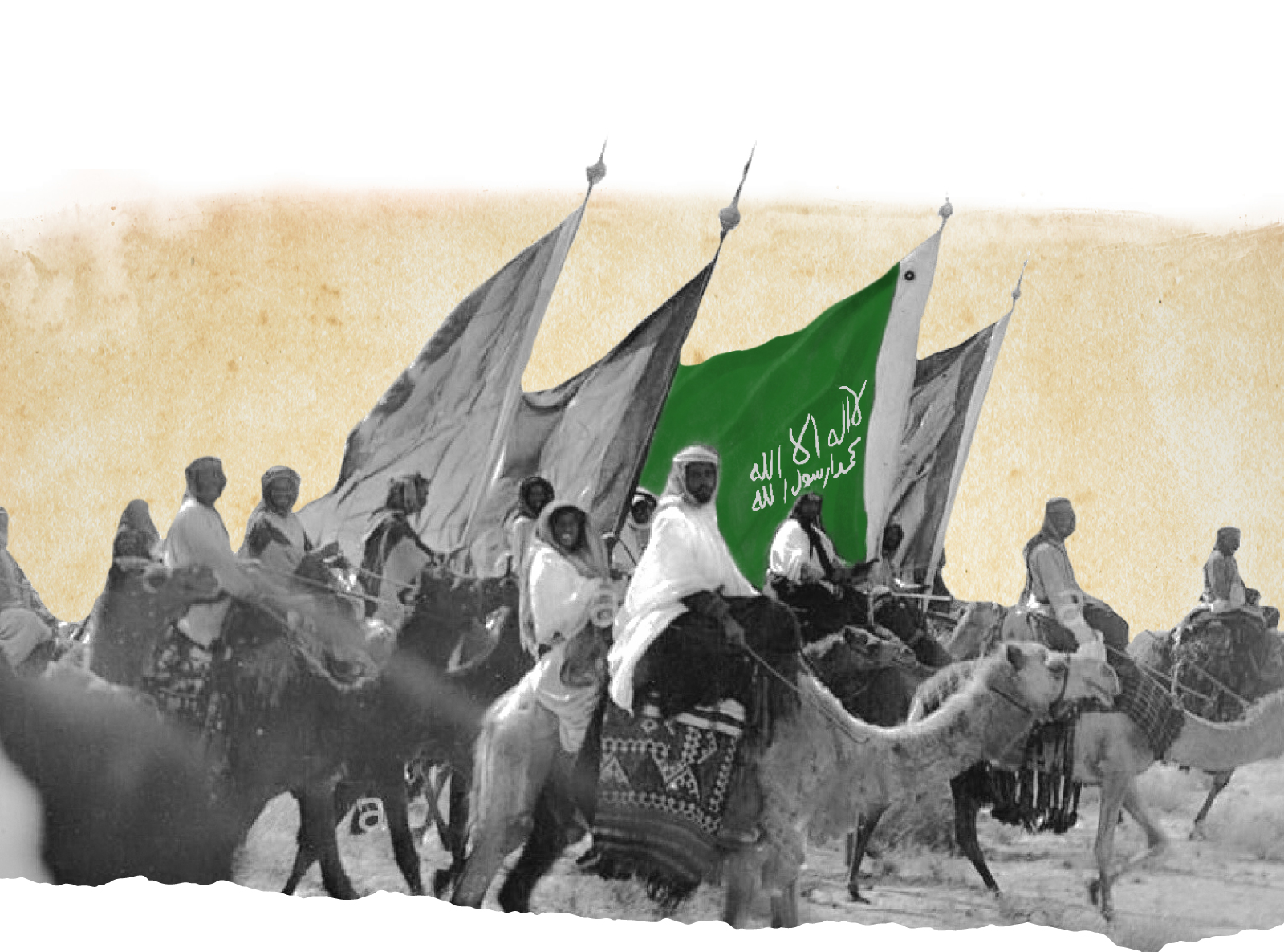 Saudi established Home within their hearts prior to political boundaries

It never crossed the Ottoman sultans’ minds that there would be men from the deserts of the Arabian Peninsula, who believe heartfully in their Arab and Islamic homeland, and those men sought its independence from the grip of the Turks who were a burden on their chests, thus bequeathing them poverty and backwardness for centuries, at a time when the power of the Ottoman family was concentrated in the Arab regions full of fortunes, such as Iraq, the Levant and Egypt, as for the Arabian Peninsula, they neglected it for decades and left it to unknown rulers who were extremely injustice against its people and left them vulnerable.

The Ottoman sultans conducted a superior policy towards the Arabian Peninsula, especially Najd and Hijaz; with the establishment of the first Saudi state in Diriyah led by Imam Muhammad bin Saud in (1744) and carrying the banner of reform and renaissance, the Ottomans felt that what was happening was not just an internal tribal movement, but a state under establishment that brings with it, a political renaissance and intellectual reform.

Nevertheless, the Ottomans initially underestimated the first Saudi state, and they assumed that any internal political force with a few weapons and support could eliminate it. However, history has proven the mistake in their presumption and evaluation, as the armies of the first Saudi state were able to repel the Turkish aggression repeated by several forces by proxy, until the Saudi state was able to unite vast lands of the Arabian Peninsula, which made the Turks keen to maintain their influence there.

The Turkish sultans felt threatened because they realized that Imam Muhammad bin Saud holds a project of a reformist state.

The first Saudi state directly clashed with the Ottoman Empire in Iraq, the authentic Arab region that has direct borders with the Arabian Peninsula; the Saudis did not consider Mesopotamia to be anything but an Arab region under Ottoman occupation such as Hijaz, and that was the Saudi dream, liberating this region from the Turkish occupation.

having Imam Abdul Aziz bin Muhammad bin Saud assumed the first Saudi state following the death of his father, the founding Imam (may God have mercy on his soul) in (1765); he resumed establishing the state and extended his internal influence until he entirely unified Najd, and was able to unify eastern Arabian island.

Saleh Al-Shura says in his book, “The position of Ottoman Iraq from the first Saudi state: The Ottomans’ attitude towards the Saudi state was variable by changing circumstances and the messages it received.” At first, it refused to pay attention to what was happening in the center of the island; however, with the sustained Saudi progress, Astana found itself fighting one battle after another against a young state in Diriyah without achieving a significant victory over it.

The Ottomans’ crisis escalated with the establishment of the first Saudi state and reaching its peak, after the Saudis recaptured Al-Ahsa; despite the fact that it was not under the Ottomans control, the matter seemed terrifying to the Turks. With the arrival of the Saudis to the ports of the Arabian Gulf, this matter provoked their opponents, especially in Iraq, and soon began to incite the tribes and the desert against the Saudi state. This prompted the Saudis to launch quick military campaigns in southern Iraq, in response to what the Ottoman governors were doing, inciting against the followers of the state and attacking them and raiding their convoys passing through their lands.

The Ottomans were convinced that tribal harassment and large non-military operations would not affect the Saudis, so they decided to launch organized campaigns, starting with the campaign of the leader of Al-Muntafiq in Iraq, Thuwaini bin Abdullah, which was directed to the capital of the first Saudi state, Diriyah, and reached one of the most significant Saudi regions (Qassim) in ( 1786), but Saudi valor thwarted the Ottoman campaign and was defeated, which made the Saudis consider that the matter will not stop there, and that they are being targeted by the Ottomans through the governors and leaders of Iraq.

After the Ottoman Selim III ascended the throne of the Sultanate in (1798-1807), the Saudi state was the most stressful file for him in the Arabian Peninsula, as despite his attempts and the attempts of those before him to end it through the governors of Iraq, it was unfeasible and unsuccessful for them, especially in light of the slowdown and the reluctance of the governors of Iraq, which was countered by the Saudi belief in unity and the legitimate right to have a homeland against the occupation. The Ottoman failure in front of the Saudi power was accumulating with every confrontation that took place between the two parties.

Historical narratives confirm that three of the occupied Arab states of the Ottomans either participated in or were ordered to eliminate the first Saudi state: Iraq, the Levant, whose governor refused to get involved in fighting the Saudis for fear of provoking them and consequently, their expansion in the Levant, and Egypt through their ruler Muhammad Ali Pasha. The latter, in turn, sent his two sons, Tosun and Ibrahim Pasha, eventually he had to go in person, to lead the campaigns. For this reason, the first Saudi state was a source of concern that insulted the Ottoman Sultanate and its sultan, despite the strength, capabilities, and imperial thought that had hundreds of years in front of an emerging power compared to their colonial state. The Ottomans could not eliminate the source of their anxiety in the Arabian Peninsula until after they decided to use everything, they got to reach Diriyah, the capital of the Saudi state, and besieged, bombed and negotiated the killing of women and children, which prompted its last imam, Abdullah bin Saud, to surrender and leave in order to preserve the safety of the people, who had been betrayed by the Ottomans.

The Ottomans were convinced that they had no desire to engage in an outright war with the first Saudi state; therefore, they resorted to terrorism, betrayal and treachery, believing that they could break the Saudis, who had built a homeland within their hearts, before they set political borders.

The Ottomans failed before the Saudis in Al-Ahsa through their governors in Iraq and their military leaders there, and the victories of Imam Saud bin Abdulaziz over them, and the humiliated request from Kikhia Ali for peace with the Saudis, proves that the Saudis dealt nobly even with their enemies, while the Ottomans dealt with treachery and betrayal, as soon as they reconciled the Saudis in Al-Ahsa, they moved from other sides to achieve their goal of eliminating the Saudis.

It was one of the first forms of Ottoman treachery against the first Saudi state; that the first case of assassination took place in Diriyah against the Saudis; was the assassination of Imam Abdulaziz bin Muhammad bin Saud (may God have mercy on his soul) in 1803, while he was praying in Al-Tarif Mosque in Diriyah by an envoy from Iraq after the Ottoman failure in Al-Ahsa, with the aim of spreading horror and terror among the Saudis, in retaliation for the insult suffered by the Ottomans from the Saudi army.

The first Ottoman terrorism operation against the Saudis was the assassination of Imam Abdul Aziz while he was praying in Al-Tarif Mosque in Diriyah in (1803).