During the Historical Moments of “Dhi Qar”.. Arabs proved That Bedouin is an Option.. And Dignity is a Firm Characteristic That Tells the Story of Their Victories over Townspeople 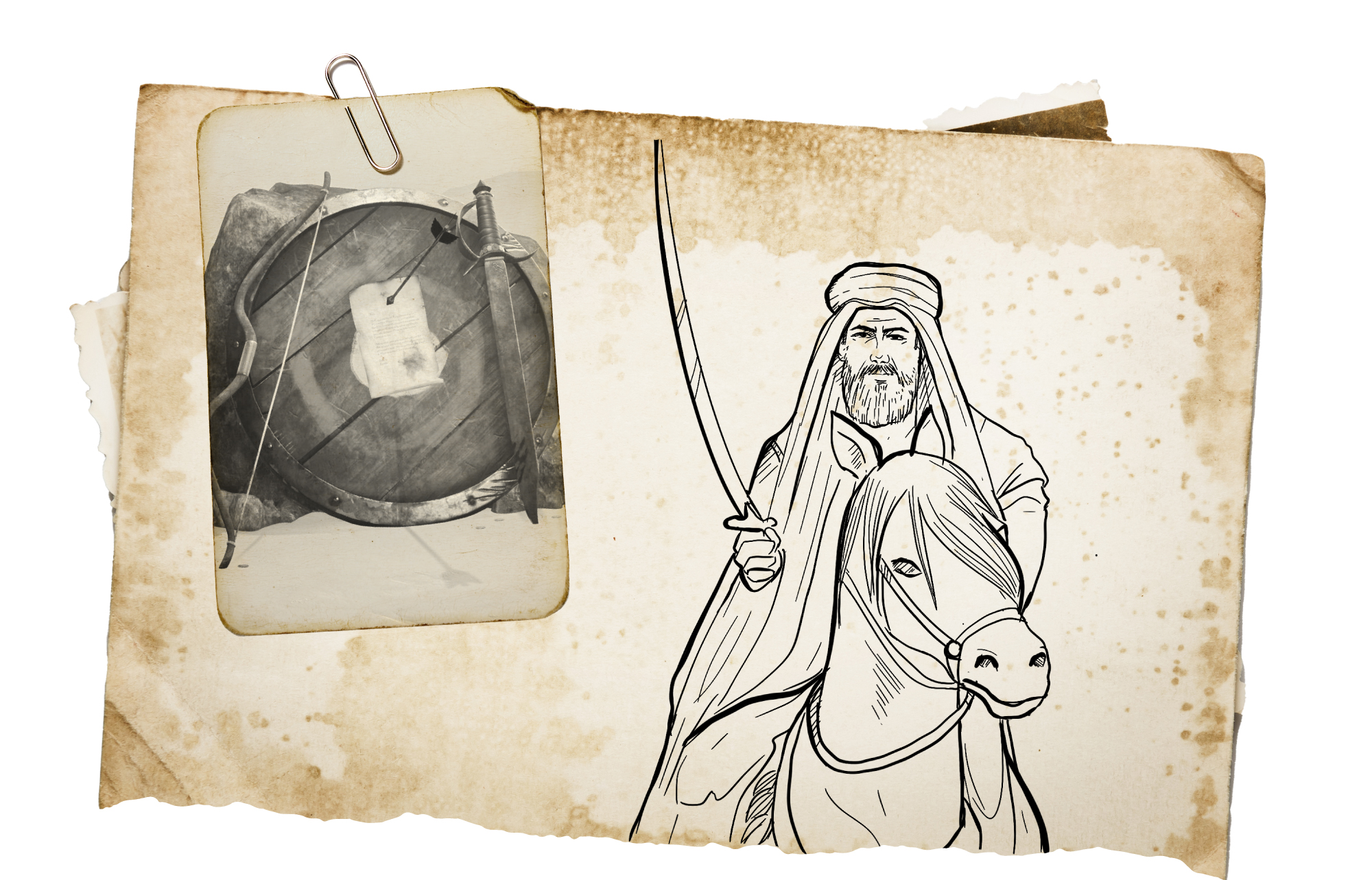 During the Historical Moments of “Dhi Qar”

Arabs proved That Bedouin is an Option... And Dignity is a Firm Characteristic That Tells the Story of Their Victories over Townspeople

Dhi Qar battle between Arabs and Persians is considered one of the most important decisive battles in the Arab history and it was the basis of the post- battle period. In addition, it paved the way for the Arab victories after that, which ended the state of Khosrows in the post- Islam Al- Qadisiyah battle during the era of Umar Ibn Al-Khattab, may God be pleased with him, 15 AH (636 AD), after which Persians were overpowered and degraded up till today, since more than 1400 years during the history of the Arab victory..

In his book titled The History of the Ancient Arabs, “Tawfiq Pro” summarizes that great battle saying: “This battle is very important in terms of the its national manifestations as Arabs- for the first time in history- dared to encounter Persians in a dreadful battle what made their morals vigorous. Although a number of Arab tribes took the side of Persians, their heart was with Arabs. This was proved when Banu Iyad disappointed the Persian army at a critical moment of the battle. In addition, Banu Sukoun and some of Banu Tamim were united in solidarity with Banu Bakr and Banu Shayban”.

As a result of betraying the Persians on the day of Dhi Qar, Iyas ibn Qabisa was removed from ruling Al- Hirah. Being the supreme commander of the army that fought the battle, the Persians considered Iyas ibn Qabisa responsible for the defeat. Perhaps he fled from them, as said by Arabs, as he separated from the battle when he realized the loss that his army had suffered. He went to Khosrow and told him that Persians won that battle fearing that Khosrow would dislocate his shoulder as he did before to the one who brought him bad news about it, then, he fled. Persians directly ruled Al- Hirah.

Most historians agree that “Dhi Qar” is a decisive battle regarding the borders of Arabs and Persians, not only geographically, but also in the historical and cultural relationship between two nations in which Persians dominated Arabs, starting with occupation, arrogance and humiliation. Due to their empire and dominance, Persians did not imagine that a nation would come from those Bedouin deserts in the Arabian Peninsula to leave them in the dust and degrade them.

Dhi Qar battle erupted on the borders between the north of the Arabian Peninsula and the south of Iraq. It is characterized as the first day on which Arabs defeated Persians during that historical stage of Persians and Romans.

Due to some reasons, a casual conversation about the beauty of Arab women who are relatives of Al- Nu’aman bin Al-Mundhir in the assembly of Khosrow bin Hormizd was turned into a major battle. This was when Khosrow was sitting on his throne in the presence of Zaid bin Uday, the Arabian, whose father was betrayed, imprisoned and killed by Al- Nu’aman. Zaid told Khosrow: dear king, your servant, Al- Nu’aman bin Al-Mundhir, has daughters, sisters, cousins and more than twenty women of his family with that quality of beauty. Khosrow sent Zaid to Al- Nu’aman with a companion for this mission. When they entered Al- Nu’aman’s place, they told him: Khosrow wanted some Arab women for himself and some of his sons. He wanted to have a family tie with you in order to be closer to you. In addition, these are the qualities he required for the wives. Al- Nu’aman told him: he would find his desire among Persian women (whom he likened to Oryx with wide black eyes that were the example of beauty in the Arabic poetry), would not he? Zaid, give my greetings to Khosrow and tell him: that Al- Nu’aman did not find such qualities among the women he knows. Tell him to excuse me as well. Zaid arrived at Khosrow’s place and kindled rancor in his heart. He also said, that Al- Nu’aman tells you: you would find your desire among the cows of Iraq.

Khosrow lost his mind because of Al- Nu’aman’s reply. However, he kept silent so that Al- Nu’aman would not fear his reaction. Then, he sent for Al- Nu’aman asking him to come. Al- Nu’aman realized that he would inevitably be killed. He took his weapons and went to the desert of Banu Shayban where he resorted to their master, Hani bin Masoud Al- Shaibani. He left his women, shields and weapons with him. He went to Khosrow who prevented him from entering, humiliated him, and sent someone to arrest him. He sent him to one of his prisons where he stayed till plague occurred, so he died there. It was said that Khosrow killed him by placing him under the legs of elephants, and there are other narrations saying that Khosrow killed Al- Nu’aman.

Khosrow appointed a new ruler of Al- Hirah who was Iyas ibn Qabisa Al- Ta’i. He instructed him to call Hani bin Masoud to bring Khosrow the women, weapons and equipment of Al- Nu’aman which he had. When Hani received the letter of Khosrow, he refused to hand over the trusts. Therefore, Khosrow made him choose either to give the trusts he had, to depart his land, or to fight a war. He chose to fight the war and started preparing an army of Banu Bakr, Banu Shayban, Ijl, Banu Yashkur, Al- Nimr bin Qasit, and Banu Zahl.

Khosrow started preparing for the battle, which he though would be easy and effortless. He gathered groups of Persians and Arab tribes loyal to him, especially Iyad tribe. He ordered them to invade “Hani” and his allies; and to bring him humiliated to Khosrow.

Through the details of the battle, it is demonstrated how the Bedouin cunning could defeat the Persian deceit. Iyad tribe that came with Khosrow and his soldiers sent a message to Hani saying, we came to fight you against our will, so shall we join you and flee from Khosrow’s army? He told them: you shall fight with Khosrow’s soldiers and come to us first, then, act as defeated in the desert. At that time, we would attack them and tear them apart. This is what happened and was the reason of Dhi Qar victory and the Persian defeat.

The persian army and their allies of Iyad came, then, they found that Hani’s army had camped in a desert where there was neither water nor trees as Hani had drawn enough water for his army. Persians began to be affected due to the lack of water and thirst. Then, they attacked Hani’s army to end the awaited battle. During the battle, Iyad tribe was defeated by the Arab army so that Persians stood alone and the Arab army attacked and annihilated them all.

The battle did not end with the defeat of the Persian army. There has been another battle inside the Iwan of Khosrow as no one could dare to inform the arrogant king that his army was defeated by the Arabs of the desert whom he had underestimated and wanted to take pleasure in their women. He rather asked to send their female relatives to him because he had heard of their beauty. This was an inevitable end for a decisive historical era. It wasn’t only between two kings, it was rather between two nations, one of which was arrogant and presumptuous. The other Arabian one did know its capabilities, used them for its interest, and won a major battle in spite of the huge army of the enemy, as well as its experience and preparations.

In the battlefield of “Dhi Qar”, the bitter truth became crystal clear and Khosrow’s palace had to deal with its consequences as it was very hard for Khosrow and his companions to accept the ignominious defeat. Iyas ibn Qabisa was the first one to come to Khosrow after the defeat. No one went to him informing him of an army defeat without facing torture. When Iyas went to him, Khosrow asked him about the news of the battle outcome; he said, we defeated Banu Bakr, so we brought you their women. Khosrow liked the outcome and ordered to give him a garment but Iyas asked his permission to leave and said, my brother is sick in Ayn Al- Tamr so I want to go to him, while he only wanted to flee from him. Khosrow gave him the permission so he left his horse “Al- Hamama”. After that, a man from the people of Al- Hirah came to Khosrow and asked, did anyone enter to the king? They said, yes, Iyas; he said, “The mother of Iyas became bereaved of him”. He thought that Iyas told Khosrow about news. He entered to him and told him about the defeat and kill of his army. He ordered to torture him and cut his hands because of that news.

At that time, Khosrow realized that the Arab nation was too strong to be despised during the early history of its first pre- Islam stage and that when it chose to live in the Bedouin and harsh deserts, this did not mean that it was an easy- defeated nation that would be contemptible or oppressed by another king or nation; neither could anyone expose to its ladies and women as “Khosrow” tried to do. In addition, his Arab allies let him down in the Dhi Qar battlefield only as a proof that he had committed a great insanity by exposing to Arab women. This has prompted everybody to fight him inflicting the first defeat in the Arabian- Persian history to Khosrow’s army. That was the beginning of the legendary battle between the Islamic army and the army of Khosrow Anushirvan in Al- Qadisiyah battle after which Persia left the history of nations and empires forever.

Khosrow overlooked that Arabs- even if dissension and division arose among them- their zeal and strength comes back at critical moments.