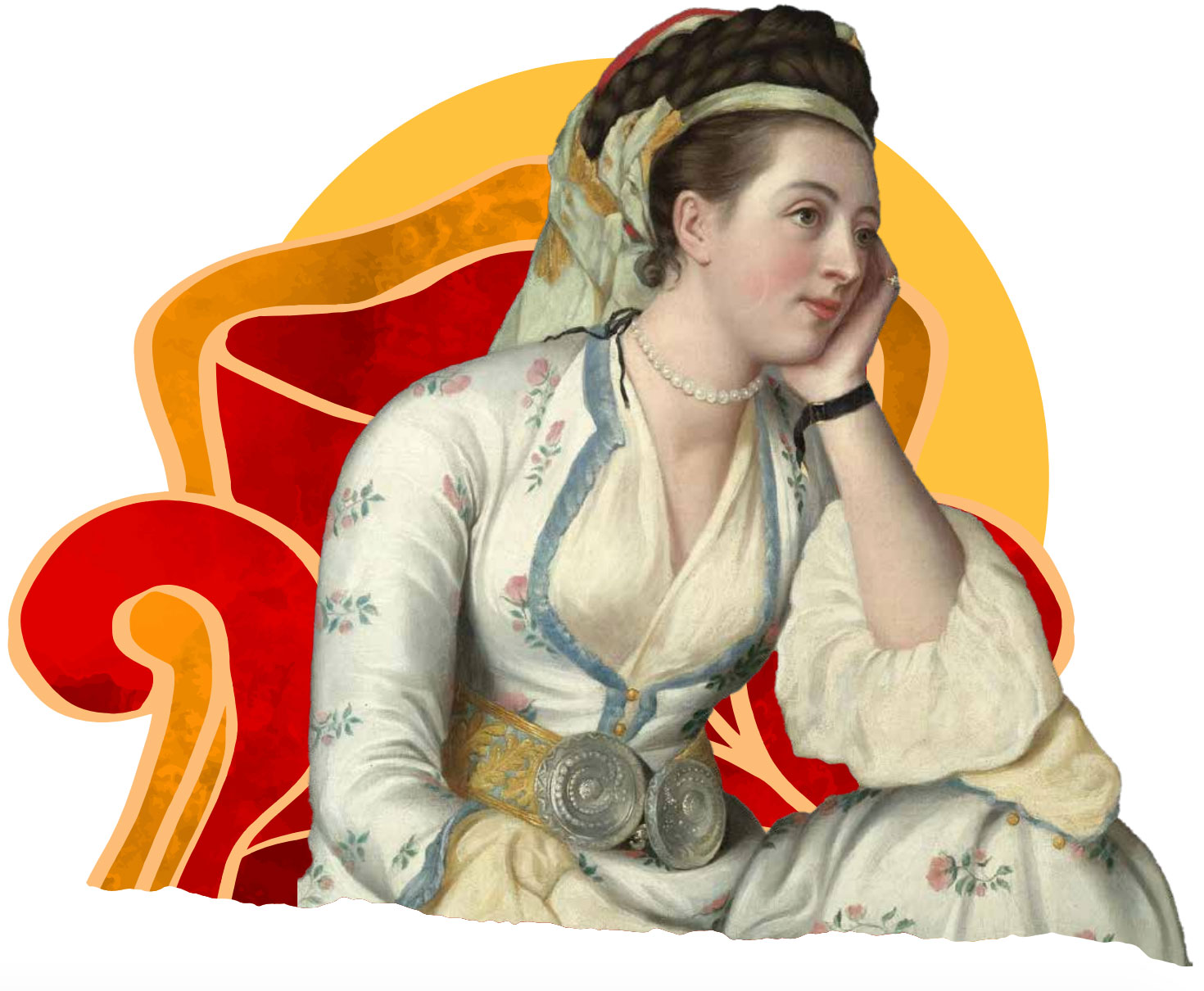 Maidservants who ascended to the throne of the Ottoman Empire

Under the ruling of the Ottomans, it was possible for any maidservant of unknown parentage and religion to instantly find herself sitting on the throne, controlling the lives of millions of Muslims. This is what historical sources say, which narrated how influential the maidservants were, in the era of the Ottoman Empire, and how they became mothers and wives of the Turkish sultans.

The path was almost paved, it was enough for any maidservant, who knows how to seduce the Sultan, to make him fall in love with her in order to deliver him a child, and according to the Ottoman protocols, she becomes a wife, then a mother to the next sultan, a position that gives her sovereignty and an expected advantage over the throne of the Ottoman family, then dominating the fate of millions of Muslims in the countries occupied by the Ottoman Empire.

Considering the weakness of the Turkish sultans as well, the task becomes easy, as most of the Ottomans family – according to historical sources – never panted after anything as much as women, and did nothing in their lives more than just lying in beds; some sultans never even left their palaces, in addition to the extravagance in purchasing maidservants from all over the world and being stacking them up in the Harem, where the place designated for them was in the palaces, which is something many leaders of the Ottoman Empire warned of, as many of the maidservants pretended to enter Islam and falling in love the Sultan, while in fact they are only spies for their countries of origin, which were hostile to the Ottoman Empire and to the Muslims at the same time.

However, the Ottoman sultans did not heed those warnings, as they did not really care about the parish; fulfilling their desires and lusts is what matters to them, so they expanded in purchasing maidservants and promoted slave markets; the result of which was that in 1475, there were more than 400 maidservants belonging to different nationalities, the only link, that they all were the sultan’s subjects.

According to the system that the Ottoman family set for the maidservants and the ranks within the Harem, the easiest way is for the maidservant to be loved by the sultan and deliver him a child to be the crown prince, which happened often, but it never stopped at this point, as some maidservants when they become wives due to the Turkish sultan’s weakness, they interfere in the government affairs, and some of them were actually ruling the Ottoman Empire.

Some may think that the era of  maidservants’ ruling the empire started at the reign of the deterioration of the Ottoman Empire; in fact, this started early, as historical sources indicate that the phenomenon of the rule of the “harem” of the Ottoman Empire began with Sultan Selim I (1512-1520) AD, as he was a dictator and a bloodthirst; his mother, Sultana Aisha, was the first ruler of the palace, as the mother of the Sultan, and she was the first to take this position, and she played important roles during the reign of her son until her death. Perhaps the most prominent feature of Sultana Aisha is that she put down the conflict of Selim I’s wives, a conflict that could have led to the assassination of the Sultan himself in order for each wife to ensure that her son would be the crown prince, which is a common occurrence since the establishment of the Ottoman Empire, and how many brothers were killed without guilt by the hands of their brothers or their sons.

Sultana Aisha, the mother of Selim I, the first maidservant who interfered in the government affairs.

As for Suleiman the Magnificent, who ruled in (1520-1566) AD, it was rumored that he was the most strict and powerful of the Turkish sultans, as historical narrations reveal that Roxelana was the mastermind behind most of the decisions he took, a maidservant of Ukrainian-Armenian origins whose original name is “Alexandra Ilyovska”, and belongs to a Christian father, she was captured at the age of fourteen, and sold in the slave market to Ottoman traders until she reached the Palace; there, she was able to take Suleiman the Magnificent mind away, who loved her, and fell in front of her beauty, so he left his army’s military campaigns and sat writing poems next to her.

Roxelana managed to deliver children to Suleiman the Magnificent (Abdullah, Selim, Bayezid) to become the wife of the sultan and the mother of the next sultan, but Roxelana’s role did not stop to this point, to ensure that her children make it to the throne, she began to play political roles to be the first lady in this field; which were not honorable, but based on killing and intrigues, as usual among the Ottoman family. Roxelana managed to incite Suleiman the Magnificent to kill the Greatest Vizier, Ibrahim Pasha, who was against the intervention of the Sultan’s wife in everything.

Suleiman the Magnificent fell in love with the European Roxelana, who incited him to kill his son.

Historical sources stated that what Roxelana did, was not unique; Arguably, she established a political doctrine, followed by the sultans of the Turks thereafter, and Selim II (1566-1574) AD, the son of Suleiman the Magnificent was not better than his father; immediately, after Selim II took over the throne, he fell in love with Nurbanu, a maidservant originally from Venice, who was born on the island of Paros in the Mediterranean, and her real name was “Cecilia”. She entered the palaces of Ottoman family when she was eleven years old and she was loved by Prince Selim II, then she gave birth to Prince Murad, thus she was elevated to the rank of “Khasaki”, i.e., the mother of the prince.

Historians call the period of Selim II the era of the Harem Sultanate because of the maidservant Nurbanu.

As soon as Selim II became the Sultan of the Ottoman Empire, Nurbanu dominated the throne; such wonder will wear off, when we know that Selim II was the first Ottoman sultan to slack in his palaces and neglect the matter of his subjects and securing the borders of his country, which prompted Nurbanu to play a greater role, so she controlled the appointments of leaders and the Grand Vizier, and established alliances with some of the Aghas of the Harem.

With Murad III ascending to the throne (1574-1595) AD, Nurbanu’s interference in the government affairs increased in a way that prompted historians to call the reign of Murad III the Sultanate of Women and the Courtier, as the real power transferred to the Harem and fell in Nurbanu’s hands.

Sophia Beluji, whom Murad III fell in love with and gave him their son, Sultan Muhammad, was the only maidservant who managed to overthrow Sultana Nurbanu. Throw such way, that maidservant became Sultana Safiya, the wife of the Sultan and the mother of a crown prince.

The path for Safiya Sultan to the throne was not paved, as the mother of Murad III, Nurbanu, was also still the ruler of the palaces, so she tempted her son with other maidservants to keep him away from Safiya; But Sultan Murad III could not, as he fell in love with Safiya.

Many secret battles, between the wife and the mother of the sultan, took place in the palace during the rule of Murad III, but Safiya, with many alliances with the Aghas of the Harem, managed to settle the conflict in her favor, as she paved the way for her son to take over. While Murad III was on his deathbed, Safiya assassinated all of his sons, who were 18, to be called the bloodthirst.

A woman who controlled three Turkish sultans, during four decades approximately; this is what the policy of the Ottoman Empire led to, whose leaders Let the reins in the hands of the maidservants, the same applied to Kösem Sultan, the wife of Sultan Ahmed I (1603-1617 AD), who entirely participated in the Government affairs during her husband’s reign and she became the most famous lady of the Ottoman Empire due to her going role and appointment of leaders, in addition to controlling the movement of promotions during the reign of her son Murad IV (1623-1640) AD, and then through her grandson Muhammad IV (1648-1687) AD.

This Ottoman policy, in which they left the reins to the maidservants, had a direct impact on Muslims and the conditions of the parish during the reign of the Turkish sultans. As historical sources elucidate that during the period between the death of Sultan Suleiman the Magnificent and the accession of Sultan Mustafa IV to the throne in 1907 AD, eighteen sultans ruled, a large number caused by the rule struggles led by the maidservants, which led to the killing of a large number of the Ottoman family.

Also, as a result of the maidservants’ domination over the throne of the Ottoman Empire, corruption appeared in the government, and deepened due to the alliances of some women with men in the palace. Therefore, it was not surprising that the periods that witnessed the emergence of women in power were the periods that witnessed the weakness of the Ottoman Empire, and the increase in independence tendencies; In addition to the aggression of Western foreign countries against it.

In conclusion, only the people, who suffered from poverty, hunger and insecurity in their country, paid the price; as a result of the sultans being sluggish in their palaces and let ruling played right into maidservants’ hands.

The increasing role of maidservants was the main reason for the deterioration of the Ottoman Empire and the aggression of the West against it.