In light of ignoring those who were before him.. The Persian culture still believes that “Cyrus” is the father of the Iranians 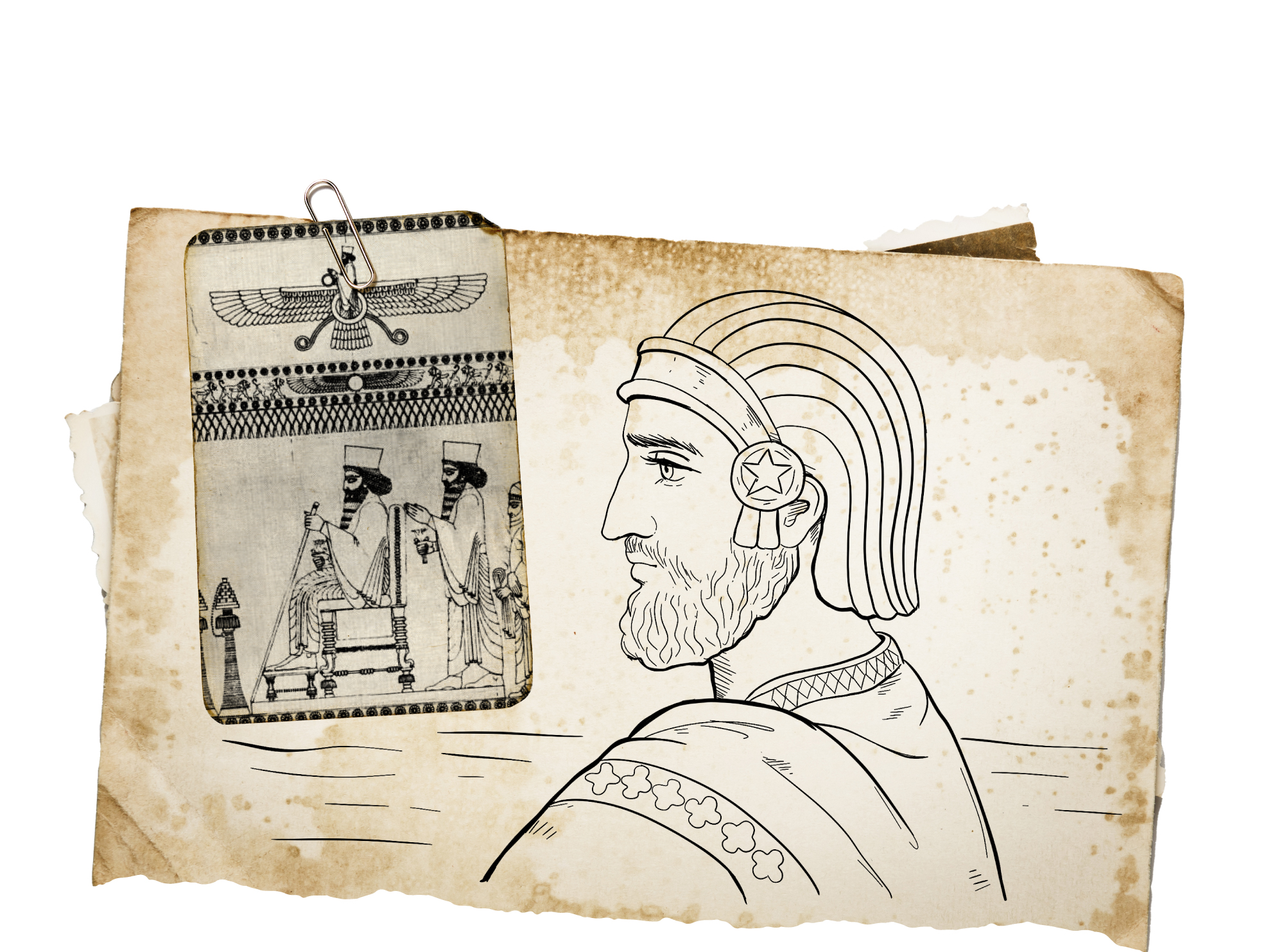 In light of ignoring those who were before him

The Persian Empire is the name given to a series of dynasties centered in modern Iran throughout history and lasted several centuries from the sixth BC to the twentieth AD. The First Persian Empire, founded by Cyrus in about 550 BC, stretched from the Balkan Peninsula in Europe in the west to the Indus Valley in the east.

The dynasty of the Achaemenid Empire promoted by Persian historians had lasted for 200 years before it collapsed by the forces of Alexander the Great. It is the empire that they recognize among themselves as the first Persian empire, considering that what preceded it since the end of the eighth century BC did not achieve the ethnic purity of Persian nationalism that they aspire to, as an affirmation of their racism.

Although the roots of the Persian Empire in its ancient times were the product of a group of semi-nomadic tribes living on sheep, goats and livestock on the Iranian plateau, Cyrus was able through this Bedouin grouping to capture his historical moment and unify them within the Achaemenid family, which was much dispersed before him. Because the Persian historians did not recognize the nation that preceded the Achaemenids, the Kingdom of the Medes was for them a group of invaders, despite its existence before that on the land of Iran. Therefore, Cyrus sought to control “Medea” in order to be able to unify the Iranian country, then moved to extend his absolute control over the capitals of the East, taking advantage of the deteriorating conditions in them and the turmoil of internal conditions in the ancient countries surrounding his country.

The Persians glorified the Achaemenid Empire because it achieved for them a history of colonialism and bloodshed at the expense of other peoples and nations.

As for the Persian religion and belief, its features were shaped in the era of the first Persian Empire by the Zoroastrian religion, where Zoroastrianism is one of the oldest religions in the world and is still practiced today as a minority religion in parts of Iran and India. Zoroaster, who probably lived before 500 BC, attempted to limit worship to a single god rather than a group of gods, according to the Persian culture that preceded him.

It is clear that the Zoroastrian formation was religiously compatible with the establishment of the Achaemenid Empire or during it. Therefore, it is logical to consider that there is a historical plot that was arranged to harmonize the thought and political history of the Persians in a process of harmonization to formulate a special heritage, despite the lack of consistent evidence from historical sources, as many details depend on myths and theories.

The most noticeable thing is that the focus on Cyrus and his Achaemenid kingdom by the Persian element was because it was the kingdom that expanded geographically at the expense of the nations close to it, and then it is natural for this empire to be appreciated and respected by the mother culture of the Persians for its results, while if its circumstances were Other than that, it would not have received so much Persian glorification.

Cyrus gave the Persians an expansive colonial history in his time at the expense of Southwest Asia, most of Central Asia and most of the neighboring regions of the Indian Empire, putting his empire on the map of the ancient world. During his 29-year rule, he fought the greatest states of the ancient classical era, such as the Medes’ state, the Lydian state, and the New Babylonian state. However, his luck did not help him advance towards Egypt when he died in a battle against the Massagetae in Syr Darya River valley in August (530 BC). Cyrus was succeeded by his son Cambyses, who managed to conquer Egypt during his short reign.

In return for the services that Cyrus provided to the Persians, which they consider that he had provided to their culture and history, and despite the bloodshed that he caused and was recorded down in ancient history against many peoples, he remained appreciated by the Persians. Therefore, his name in their culture is always associated with the term “The great”, or “Fizirka” in ancient Persian, and in contemporary Persian “Bozorg”. In confirmation of the symbolism of Cyrus among the Persians, the Iranians still consider him the father of Iran.

Therefore, all Persian sources consider the killing of Cyrus a major event of his time. This is confirmed by what Selim Hassan said in “Encyclopedia of Ancient Egypt and a Glimpse into the History of the Greeks” about the Egyptian Renaissance, where he explains what happened to the Kingdom of Cyrus after his death:

After Cyrus’ death, his son ruled for a few years. After that, a great king called “Dara I” took power, whose empire at that time included Egypt and extended east across the borders of India. In fact, King Dara (521–486 BC) linked the outskirts of his empire to a network of roads that led to Sus, the capital of his kingdom. From the city of Sardis, the seat of his camp in the west of his possessions, there was a 1500-mile road guarded at the mountain passes and at the mouths of rivers by Persian soldiers. Tourism between the two cities used to take three months, but urgent messages were transported to and from Sus in a week.

The murder of Cyrus was a major event in the course of the Persian Empire. Although his son made an attempt to unite the country and the nation, the turmoil began to reach the rule until Emperor Darius came. He was also called Darius the Great. The Arabs call him Dara I, and the Greeks call him Darius I. He lived between the years (549-486 BC) and ruled during (521-486 BC).

Revolutions broke out throughout the empire after Cambyses’ death, and Darius had to subdue them one by one. In Babylon, one of the leaders announced the revolution and declared himself king in the name of Nebuchadnezzar III, so Darius headed an army to Babylon. The army faced great difficulties in crossing the Tigris River due to the strength of the Babylonian fleet, but Darius made a surprise attack, so he crossed the river and defeated the Babylonians who sought refuge inside their city. Darius knew that taking control of Babylon was an effective solution to put an end to all other revolts, so he focused his attention on subjugating the city that surrendered in (521 BC). After that, Darius attacked Medea, defeated its army, captured its king, and executed him by hanging in Hamadan. He also entrusted some of his leaders to end the revolution of Parthia (Khorasan) and Karakan, and this was done.

Darius’ armies were able to put down a revolution in Egypt in (519 BC) and occupy Thrace in southeastern Europe in (513 BC), and years later the Persian forces occupied what is now called southern Pakistan. Darius ruled his empire by dividing it into major provinces. Among the actions of the officials chosen by Darius to administer these provinces was to increase local taxes to supply the royal treasury and to supply Darius with soldiers.

In this way, Darius put down all the revolutions and was able to reunite his empire. Darius recorded his victories in detail in the famous “Behistun inscription”, which was written in three languages, including Old Persian and Babylonian. Darius, who was a young twenty-year-old, ruled for a long time, which began by recording the history of his country on a huge column. Among his achievements were the reorganization of the empire, such as building and paving roads to facilitate postal correspondence, receiving news from his spies quickly, in addition to the administrative division of his provinces, which amounted to twenty. He annexed the Ionian settlements to the state of Lydia in Asia Minor. He also allowed the Jews to complete the construction of the Temple again in (515 BC).

The close relationship of the Jews with the Persians is explained by the fact that Cyrus liberated them from the Babylonian captivity after he had overthrown the Babylonian kingdom. Therefore, the Jews are still first-class allies of the Persians, regardless of the political disguise.