The Dakhma made the bodies of their dead food for vultures.. The Zoroastrian beliefs of the Persians were influenced by an Indian culture that believed in myths 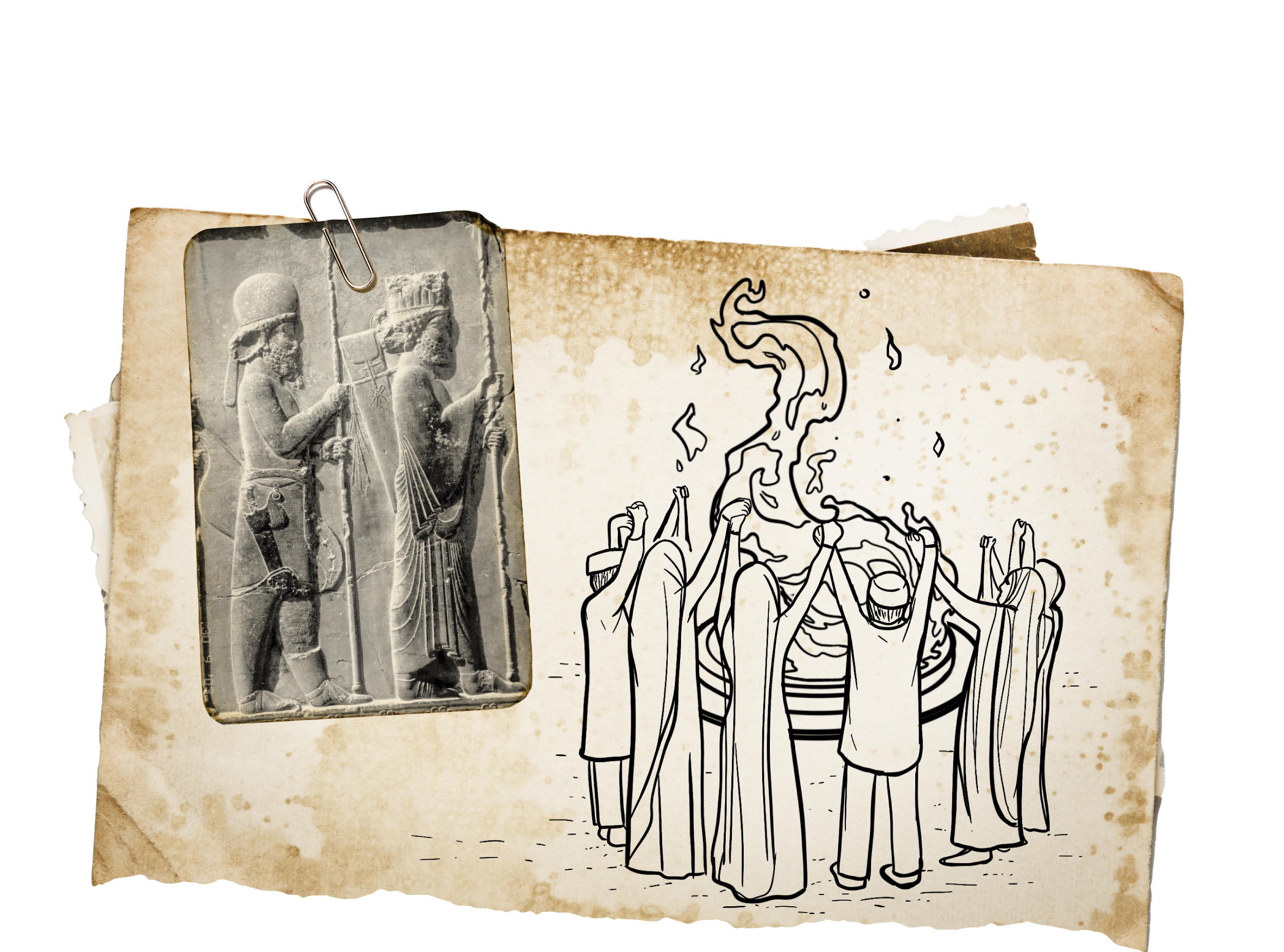 The Dakhma made the bodies of their dead food for vultures

The beliefs, religions, and various rituals of ancient Iran were associated with deviant beliefs, most of which are linked to myths and legends, which are an influential part of the Persian mentality, starting from the early Persians’ worship of the sun, moon, stars and nature, and they are influenced by Indian beliefs.

The gods of India were similar to the gods of the Persians, as is the case with the gods Mitra, Mehr, Andra, Aruna, and other deities worshiped other than Allah. Zoroastrianism has appeared since the seventh and sixth centuries B.C., which is attributed to its founder Zoroaster, who Al-Shahristani (death: 548 A.H.-1153 A.D.) said about him in his famous book Al-Milal Wal-Nahl on Zoroastrianism: “Those are the companions of Zoroaster, son of Yorsheb, who appeared in the time of Kashtasb, son of King Lahraseb, and his father was from Azerbaijan and his mother was from Ray and her name was Degdawiya. They claimed that they had prophets and kings, the first of whom was Kiomrath, and he was the first to rule the earth, and his sanctuary was located in Istakhr, and came after him Oshinhak, son of Faruk, and he descended into the land of India, and he had a mission, then came after him Tmhudt… and then came after him prophets and kings, namely; Manujhar, who moved to Babylon and resided there. They also claimed that Moses, peace be upon him, appeared in his time until Kashtasp, son of Lahraseb became the ruler. In his time, the wise Zarathustra came, and they claimed that God Almighty, since the time of the Earliest Books and holy scripture, created a spiritual creation, and when three thousand years passed, he carried out his will in an image of sparkling light based on the image of man, surrounded by seventy honored angels, and created the sun, the moon, the planets, the earth, and the children of Adam without soul for three thousand years, then he placed the soul of Zarathustra in a tree that he built in the highest heavens, surrounded by seventy honored angels, and planted it at the top of a mountain in Azerbaijan. He has a classified book, which he said it was revealed to him, titled Zand-Avesta, in which the world was divided into two parts: Mina and Wauketi, meaning both the spiritual and the physical worlds. Zoroastrianism claims that it has many miracles.

It is understood from Shahrastani’s words that this religion was based on claims, legends and myths, especially that Zoroaster’s book contained irrational rituals, chants and rules. It only included peoples of Central Asia’s beliefs on the forces of nature and their divine symbolism.

Zoroastrianism was the official religion of the Achaemenid, Parthian and Sassanian empires, and was known as Mazdaism. Will Durant emphasizes in his book, The Story of Civilization, that the Medes were the ones who gave Persia their Aryan language and their thirty-six letters of the alphabet, and who taught them their moral laws, and guided them to depend during peace on agriculture, and at the end, they indoctrinate them with the religion of Zoroaster.

The Medes gave the Persians their writing system and developed their language, which they cherish today.

Thus, Zoroastrianism believed that the ancient ritual of fire was a symbol of light and the law of the cosmic god. The Persians, since before Islam, had been condemning Zoroastrianism (Mazdaism) that is based on the unity of existence, and on the union or separation between emanations from two gods, the god of light and the god of darkness. The doctrine of the Magian majority was based on the principle of light and darkness belonging to a higher being and from whom existence emerged, then Manichaeism came in agreement with Zoroastrianism in the origin of the doctorine.

As for the worship of Zoroastrians, at first, they did not have dedicated temples, but rather were isolated places in which they performed their religious rituals, then gradually appeared some rituals that did not seem to be approved by Zoroaster, such as the use of Hawuma, a kind of poison, in their rituals and false prayers, and the slaughter of bulls, to offer them to the god Mitra. Zoroaster integrated into his religion a range of ancient Persian deities, and divided his gods into two types: good gods and evil gods, and Ahura Mazda is on top of the good ones, and his cooperation with six gods expressing abstract meanings, such as sound thought, righteousness, divine ruling, piety, salvation and immortality.

Ahrman is on top of the evil ones, and the struggle between him and Mazda, which sums up the Zoroastrian philosophy of the universe. In general, the outward features of Zoroastrianism are taken from the worship of Hindus and Sikhs. Fire is sacred to the Zoroastrians and they use it in their rituals, and it symbolizes some pure substances, as well as water and earth. Their eagerness not to profane their worship ended with exaggerated means of purification.

Zoroastrians wear some symbolic religious clothing as part of their daily dress to remind them of their religion, including wearing the sacred belt (Kushti) in which seventy-two threads are tied, symbolizing the chapters of the book (Yasna), and the belt is tied several times a day as a metaphor for moral and religious resolve.

Also, among their symbols is the Sadari shirt, which symbolizes the religion itself, and the priests among them wear white robes, turbans and masks over their mouths while performing the rituals of the sacred fire, in order to avoid profanation with the same breath. One of them must submit to the ritual of purification before prayer and confess the sins committed by thought, word and deed.

The Zoroastrians also believe that death is the work of Satan, so the corpse is the dwelling of demons, and the greater the righteousness of the deceased, the greater the power of the demonic action, so they put the corpses in the “towers of silence” (dakhma) where eagles prey on them. Their ways are similar to the inhabitants of the Tibetan highland in making the bodies of their dead prey to vultures.