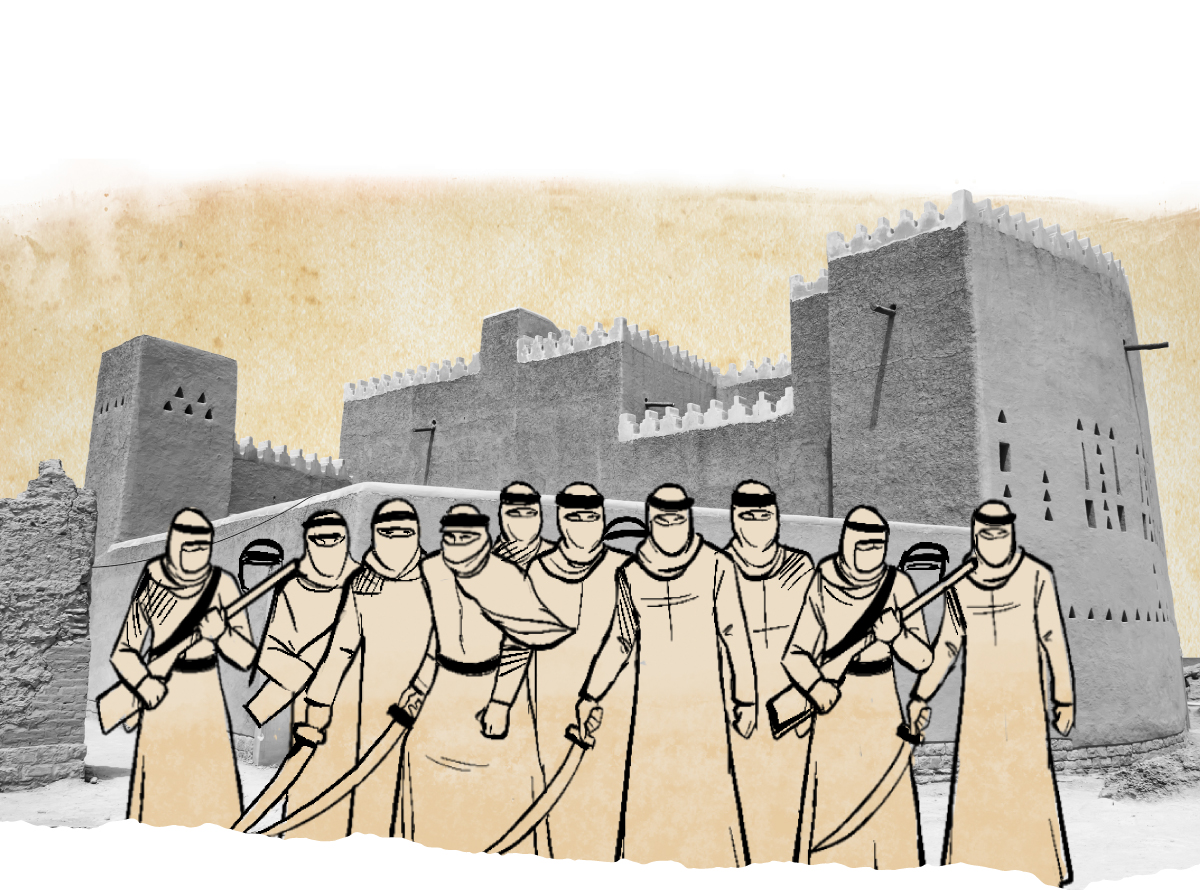 History has proven that the Ottoman sultans spared no effort in seeking to overthrow the First Saudi State, and despite being defeated by it in more than one battle led by their governors who returned with their tails between their legs after their defeat by the Saudis, the Ottomans continued their stubbornness and terror in killing any Arabian attempt to rise, that was a principle followed by the sultans, to keep their colonization and their exhaustion of the Arab civilization.

The forces of the ottoman governor of Egypt, Muhammad Ali Pasha were the ones who suffered the most from the war against the Saudis, as his forces since they laid their feet on the Arabian Peninsula, faced a fierce resistance, such resistance was due to the Saudis’ belief in defending their country and homeland, in addition to the fact that the ottoman forces suffered from the rugged geographical environment and the far distance to the supply line coming from Egypt.

Due to the persistence of the ottoman governor, Muhammad Ali, to achieve his goal of pleasing the ottoman Sultan and expanding his influence in the Arabian Peninsula, he tried to the change the tide of war by sending more troops and gears, and searching for more effective ways to connect the supply lines with his invading forces, thus, he initially resorted to replace the commander of his campaign, Ahmad Tosun with his other son, Ibrahim Pasha, who was more astute and more militaristic, as well as more brutal and far from human values.

With the arrival of Ibrahim Pasha to Hijaz, the military balance of the Ottoman forces in the Arabian Peninsula changed to a large extent, especially with the arrival of supplies from Egypt and other states, which mobilized the Ottoman Sultan, in addition to putting more of war cannons into the fighting. However, the battles were not easy at all for the Ottomans as they confront the First Saudi State, this is proven by what happened in their siege of Al Rass in (1817 AD), and the resistance they encountered despite changing their strategy, and the size of the forces and gears, which was double the forces and gears in Tosun campaign.

The ottoman governor, Muhammad Ali, insisted on overthrowing the First Saudi State to please his ottoman Sultan and due to his desire to extend his influence to the Arabian Peninsula.

Ibrahim Pasha’s plan after overthrowing Medina was to quickly open the way to Qassim and have it under control; as it is the fastest way to reach the capital of the First Saudi State, Diriyah, which he could hardly reach in (1818 AD), after he insisted on the uninterrupted flow of supplies and gears from his father since he laid his feet into Saudi lands. Despite this significant support, anyone to observe the circumstances of Ibrahim Pasha’s campaign notices the significant losses inflicted on him by the Saudis, even though he managed to overthrow Saudi cities and towns on his way to Diriyah. However, the supply line was a major reason for his arrival in Diriyah, in addition to Ibrahim Pasha’s brutal and vengeful approach against whoever falls into his hands from the people, whoever he is. This caused a state of true form of terrorism, considering that the Arabs were not accustomed to such brutality and inhumanity that they faced from the Ottoman forces, which were presenting hatred and terrorizing the poor people before the fighters, and an excellent example of this was the Ottoman and Ibrahim pasha’s brutality clearly demonstrated in Dharma on his way to Diriyah.

As Ibrahim Pasha was approaching Diriyah, the Saudi forces barricaded there, preparing to defend it against the invading Ottoman forces. Realizing, by their Imam Abdullah bin Saud, that the defense of Diriyah is their important epic battle, and that it is their last resort, so the path for the Ottomans was not paved, as the Saudis continued to defend Diriyah for about six months, during which they made Ibrahim Pasha feels helpless, and caused him several problems by losing his finest and fiercest fighters before the walls of Diriyah, which, despite the siege, stunned the invaders, and made their leader suffer and feared that he would not reach his goal, although all the circumstances indicated that with the arrival of the Ottoman forces behind the walls of Diriyah, the battles would end.

During the Ottoman siege of Diriyah; Several battles took place, such as: Al-Alb, Ghubaira, Samha Al-Nakhl, Al-Salmani, Shoaib Kulikal, the warehouse fire and the Rafia incident. These were the most powerful confrontations against the Saudi army, which fiercely defended its land against the invaders in Shuaib Blida; which is located in the southern region of the city of Diriyah.

The Saudi historian Othman bin Bishr describes that incident, by saying: “It took place at Blida, the well-known Shuaib on the southern side, where several Diriyah’s people were killed, and one of the Romans was killed, then it occurred at Blida also, the Romans attacked the people of Diriyah in their barricades and seized it, and fierce fight took place from noon until the afternoon, subsequently, the people of Diriyah attacked them and expelled them from Al-Mahaji, and they killed several of the Romans, then seized their dead.”

Hit and run battles and incidents continued, and the siege of Diriyah continued until they came to terms and Diriyah fell into the hands of Ibrahim Pasha’s forces, which did not reach their goal until after they incurred significant losses, as they faced great steadfastness from the Saudis who did not abandon their capital, had it not been that the scales of the war were not equal.