The first Persian aggression in history against the Arabs.. Dhū’l-Aktāf invaded eastern Arabia, and the narrators exaggerated his incursion into Al-Yamamah 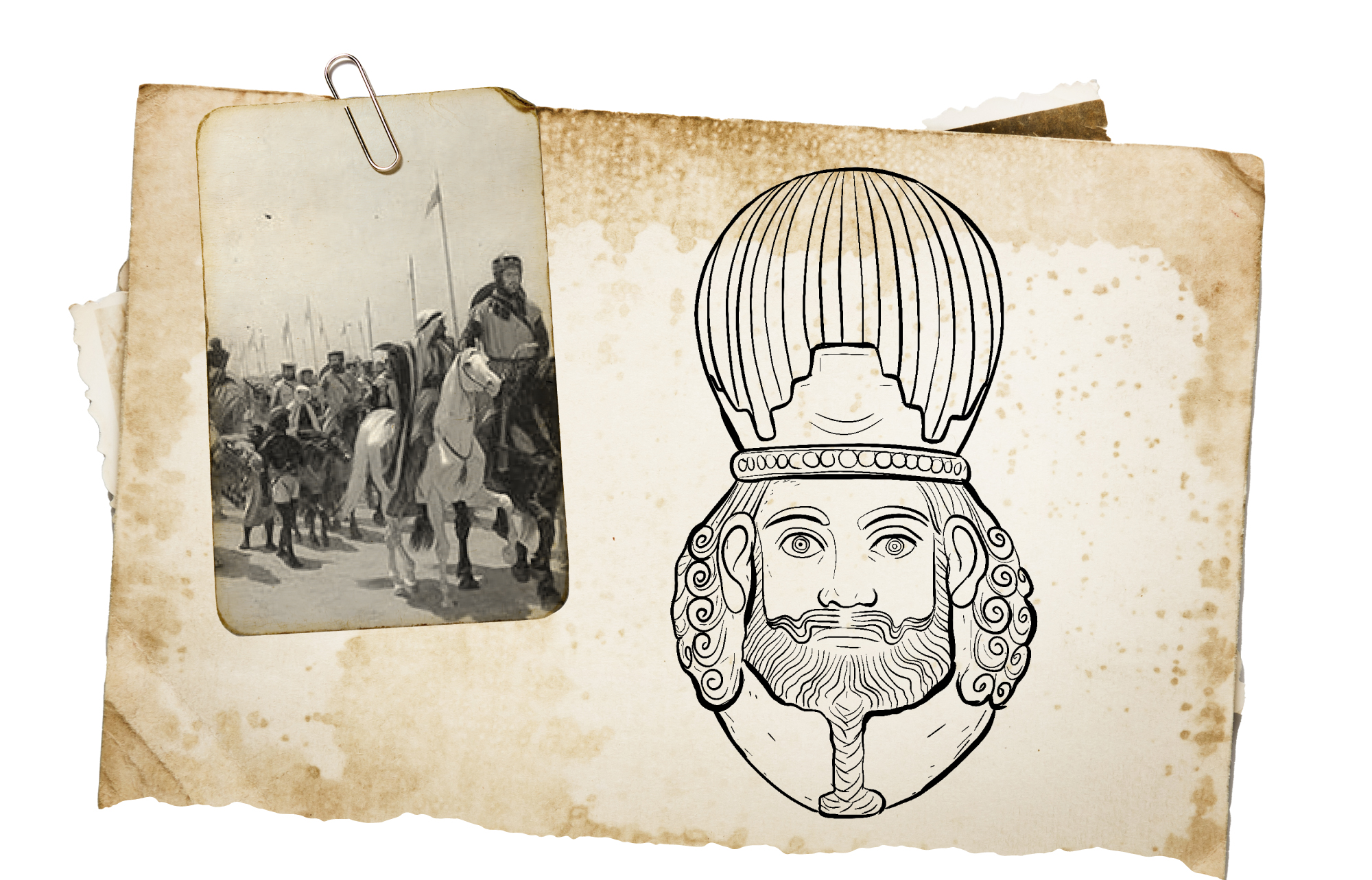 The first Persian aggression in history against the Arabs

Dhū'l-Aktāf invaded eastern Arabia, and the narrators exaggerated his incursion into Al-Yamamah

The first Persian invasion on the Arabian Peninsula in old history was launched by the Persian King Shapur II, who invaded the Arabian Peninsula and spread destruction in light of the tense relationship between him and the east of the island that lasted for decades as confirmed by historical sources, after the Arab tribes reached the borders of the Persian Kingdom in their search for living resources away from their parched island which lacks water and food. This provoked the Persians to a great extent, and prompted Shapur to take revenge on the Arabs of the island, and to attack them in their own homes.

Shapur was no ordinary king of ancient Persia, as he had a condescending and aggressive personality considering that he was crowned as a king in his mother’s womb after his father died, where the wise men of Zoroastrianism came with his father’s crown and placed it on his mother’s womb, and the Persian rulers continued to rule in his name and his mother’s guardianship until he reached the age of sixteen to directly take over the affairs of his state, and thus ruled his country for 70 years during the period (309-379 AD).

Because Shapur was treated as a king before his birth and adulthood, he had a very arrogant and fierce personality, and due to the rumors that spread among the surrounding nations regarding the circumstances of his kingdom and that its king was a child, many of them coveted to extend their influence, and the Roman state was the greediest of those, as well as some Arab tribes that had reached the borders of his Persian kingdom in search of pasture and water during the reign of Shapur. Thus, the Persian kingdom fought several battles with those greedy nations.

Because the closest Arab land to the Persian kingdom was Iraq, which was controlled by a group of Arab tribes led by the Iyad tribe from that early period in the history of the Sassanid state, bad blood always existed between the Arab tribes in Iraq and the southwestern regions of Persia.

Against this reality that Shapur found himself in, he wanted to secure his borders from the Romans first, so he launched his campaigns against the Romans, and spread to the fortified Amd Fortress (currently Diyar Bakir) and gained control of it with difficulty in (360 AD), he then fought fierce battles on the Tigris coast with Julian, the Emperor of Rome, who crossed the Euphrates and seized the cities of Mesopotamia, including the city of Fayrouz Shapur. Later, the Romans were forced to accept a peace treaty with Shapur, and the Roman emperor signed a treaty which states that Persia shall recover the nations it lost, and the two parties agreed to stop wars and impose a peace between them.

In view of the Roman-Persian peace, there was no enemy left for Shapur to fight the war that he began against, except the Arabs who were caught up in the middle of the war between him and the Romans, and who were a constant concern for Shapur, because they were the rulers of Iraq and its people. That is why the historian Al-Masoudi says in his book “Muruj Al-Dhahab”: “When Shapur grew up, he recovered large parts of his kingdom, then headed towards Iraq, and spread destruction. Shapur was able to secure the southern regions of the empire, and only a group of people managed to escape to the Roman lands. In Karbala, Shapur dug an old trench passing through Kufa to repel his enemies’ attacks on his kingdom, and from here we know that the main purpose of the Shapur trench is to defend. This method influenced the great companion Salman al-Farsi who he then went to Medina and explained it to Prophet Mohammad, may Allah’s prayers and peace be upon him, in the Battle of the Trench, and then it was applied, and it is said that it is an ancient Persian military method.

Shapur II decided to declare war against the Arabs as soon as his hostility reached its limit, and the people of Bahrain and Iraq had the first share of extermination and abuse. The researcher Shakir Majeed Al-Shatri says in his book “History of the Persian Empire”: “Shapur started his first war against the Arabs in the Black Land or Iraq, so he killed them and tortured them one by one, and he deliberately inflicted harm upon them and exiled them from their own country, especially the Iyad tribe. In this hateful situation, Shapur managed to butcher the Arabs and killed a large number of Iyad’s and Tamim’s people. His armies launched extermination campaigns, some of them fled to the Romans and some of them to Bahrain in the east of the Arabian Peninsula, so he hunted them down to Bahrain and marched to Al-Ahsa and Qatif, then returned to Diyar Bakr and exterminated them as well, then to Al-Yamamah deep inside the Arabian Peninsula. Whoever opposes him, he pierces their shoulders, and that is why he was called Dhū’l-Aktāf (he who pierces shoulders), and it is said that he used to crucify them by their shoulders on the mountains.”

As the Iraqi Jawad Ali says in his book “The Detailed History of the Arabs Before Islam”: “Historians mention that Shapur was nicknamed Dhū’l-Aktāf because he pierced the shoulders of the Arabs. Jawad did not exclude that claim, as such painful torture methods were well known back in those days.

After Shapur finished his first campaign on eastern Arabia, he spread west towards Al-Yamamah and then Medina, where he invaded the deserts and cities. Shapur was not satisfied with just murdering and threatening people, but also forcibly exiled some Arab tribes by force, apparently to break their alliances and disperse their power so that it will not surpass the Persians again. He exiled Taghlib to Bahrain and Al-Khatt, and Abdul Qais and Tamim to Hajar, and Bakr bin Wael to Kerman, and Bani Handala to a place near Ahvas. In order to prevent the Arabs from initiating raids in his country, Shapur II ordered the construction of a wall near the city of Al-Hira, which became known to the Arabs as the “Arab Wall.” All of this paved the way for an Arab-Persian war that came before Islam, known as the Battle of Dhi Qar, which ended with the defeat of the Sassanid army and the victory of the Arabs, and followed by a few years the great battle of Al-Qadisiyah, which ended the rule of the Persians completely and avenged their conquest of the Arabian Peninsula.

The Arabs were a concern for the Persians, and the campaign of Shapur II on the Arabian Peninsula paved the way for the major battle in Dhi Qar.

Researcher Munira Muhammad Antar summarizes in her book “Shapur Campaign on Eastern Arabia”, what can be described as the closest analysis to the reality of the events in that period, of which sources are scarce, as she basically based it on a war over the trade roads, she says: “It is possible to say that the history of this campaign raised more questions than conclusions regarding the history of the Arabian Peninsula in that period (3rd to 5th centuries), where we found many complications that confused the events, a conflict over trade roads, whether land or sea, and this conflict was accompanied by a religious conflict, where the Romans imposed religion on every incident they coveted in the Arabian Peninsula, and the conflict in Armenia between the Persian and Roman empires ​​in the name of religion, as well as the campaign of the Arab king Imru’ al-Qays, who gave up his subordination to the Persians and sided with the Romans.”

The campaign of Shapur II on the Arabian Peninsula was part of a larger conflict between the Persians and the Romans. The campaign was not a separate incident, but it was part of a war that continued throughout the reign of Shapur after he broke the peace treaty that had been concluded with the Romans and lasted for forty years. As we learned from the sources, it ended with the Persian recovering their lands In Armenia, where Christianity spread, and close relationships were established between it and the Romans in northern Iraq. It seems that Shapur’s seizure of the western Euphrates and the extension of his influence in northern Iraq almost coincided with his seizure of eastern Arabia and the advance of the Persian armies to the Roman borders in the center of the Arabian Peninsula. This prompted Constantius to initiate his diplomatic mission to confront the Persians in southwestern Arabia.

By following the historical sources on the campaign of Shapur, Dhū’l-Aktāf, on the Arabian Peninsula, there appears to be many contradictions and discrepancy regarding its details, as most of what was mentioned about this campaign was exaggerated, especially with regard to the incursion of the Shapur campaign into the center of the Arabian Peninsula. It is unreasonable for Shapur to cross the east of the island he reached on the way to his campaign, especially since the westward incursion to Al-Yamamah and its surroundings was considered a major risk at the time of Shapur, as the Arabs are difficult to reach in their homes, especially since the experience of the Roman campaign on the south of the Arabian Peninsula from the north proves this theory that the incursion of forces into the center of the island would be fatal to the armies, especially since the Arabs were well aware of how to maneuver against the enemy on their land and between their wells that no one else knows about.

In conclusion, Shapur most likely did not cross the eastern Arabian Peninsula, as it was the farthest place he reached. The narrators and chroniclers greatly exaggerated in their history records, which makes it difficult to believe and prove such claims.