They killed their leaders and knights; and taught them a lesson of dignity as well.. “Dhi Qar”… The Day on Which Arabs United and Made the Persian Arrogance Feel the pain of Defeat  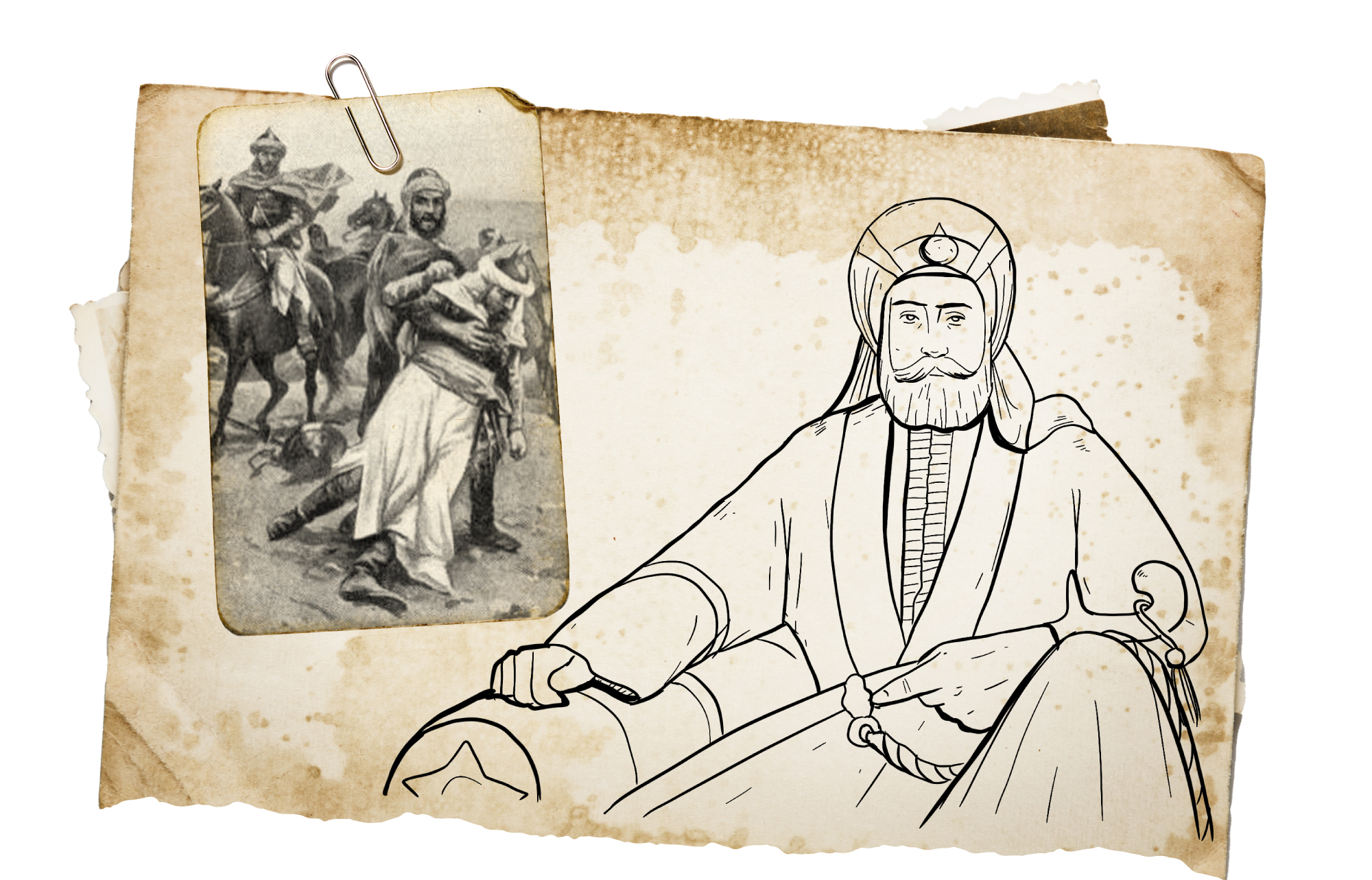 They killed their leaders and knights; and taught them a lesson of dignity as well

“Dhi Qar”... The Day on Which Arabs United and Made the Persian Arrogance Feel the pain of Defeat

Since the dawn of history, Arabs have been plagued by the neighborhood of Persians up to this present day. Arabs fought battles and wars against them since ancient times. Although Persians adopted Islam, they borne inherited rage, hatred, and racism towards any Arabic thing, especially after Caliph Umar Ibn Al- Khattab, may God be pleased with him, had destructed their last political stronghold after Al- Qadisiyah battle (636) which became a source of hatred towards Arabs in the Persian collective mind (of Persian people).

In addition to Al- Qadisiyah, Persians had historical accumulations, before adopting Islam, against Arabs. The famous Dhi Qar battle during the Pre- Islamic period was one of the most important battles between Arabs and Persians. It is well known in Pre- Islamic history that Arab Kingdoms and tribes had political loyalty to Persians, the most prominent of which would be the Kingdom of Al- Hirah whose first kings was Malik bin Fahm Al- Abrash, and his son Jadhima Al- Abrash; then, Amr bin Adi, and also Al- Nu’aman who built Al- Khornaq and Al- Sudair palaces, his son Al- Mundhir, then, Al- Nu’aman bin Al- Mundhir, the last king of Lakhm tribe.

One of the most important causes of the famous Dhi Qar battle in the Pre- Islamic history of Arabs was that Khosrow demanded the inheritance of Al- Nu’aman bin Al-Mundhir, but Iyas ibn Qabisa told him that it was a lodgment at the tribe of Bakr bin Wa’il (Banu Bakr). Khosrow ordered him to give it to him. Thus, Iyas sent to Hani bin Masoud Al- Shaibani ordering him to give him back the lodgment of Al- Nu’aman including his money, shields, and everything belonged to him even his women. Their number, as mentioned by historians, was eight hundred shields, while some said they were seven thousand shields. Hani bin Masoud refrained and refused to give the lodgment entrusted to him by Al- Nu’aman bin Al- Mundhir. Khosrow Parviz became angry and threatened to eliminate Bakr bin Wa’il. Therefore, Al-Nu’man bin Zara’a Al-Taghlabi, who hated Banu Bakr and sought to destroy them due to Al- Basous war, advised him to grant Banu Bakr a respite until summer, then, they would rush to get water from “Dhi Qar” well. They would rapidly fall one after another, then, Khosrow would sieze them. When the temperature of Banu Bakr area had become very hot, and they had felt blistering heat, they went to Dhi Qar area. Khosrow sent them Al-Nu’man bin Zara’a giving them three choices: either to surrender to Khosrow so that he would deal with them, as he desired, to depart, or to start war.

Having only those oppressive and unjust choices for Banu Bakr, Hanzala bin Tha’labah bin Sayar Al- Ajli advised his people to fight the war against the Persians because if they surrender, they would get killed while their offspring and their women would be taken captive; if they departed, they would die of thirst and their enemy would follow them to eradicate them. At that time, Khosrow sent them the Persian army led by Hamzer Tustri, the great satrap of Khosrow, leading one thousand Persians; in addition to Jalabazin, for whom Bariq Obelisk was built, leading a thousand horsemen. Iyas ibn Qabisa went to the battle leading Al- Shahba and Al- Dawsir, who were two battalions that Persian kings made a military force affiliated to Al- Manathera: Al- Shahba men were Persians while Al- Dawsir men were Tanukhi Arabs in particular accompanied with Khalid bin Yazid Al-Bahrani leading Al- Bahra’ and Iyad tribes. In addition, Al- Nu’man bin Zara’a Al-Taghlabi went leading Taghlab. Al- Nimr bin Qasit, Qais bin Masoud bin Qais Dhi Al-Jeddin, and one of Khosrow’s governors and satraps of Safwan went as well.

Khosrow ordered that these armies shall be led by Iyas ibn Qabisa and shall assemble under his brigade. When Persian armies came, Qais bin Masoud bin Qais Dhi Al-Jeddin infiltrate into the camp of Hani bin Masoud, and advised him to distribute the weapons of Al- Nu’man to his tribe in order to be armed, then, they would return them to him. He heeded his advice and divided shields and weapons to those who had strength and patience of his people. When the armies of Iyas ibn Qabisa Al- Ta’i approached, Hani feared the defeat, as they were not able to fight Khosrow’s armies and the Arabs who joined them.

Hanzala bin Tha’labah bin Sayar Al- Ajli felt sorry to see the Arabs fleeing from the Persians and their armies. He stood still before Hani and said, “You only wanted to rescue us, but all you did is that you brought us to devastation”. He made people return so he dismembered the animals that were driving caravans so that Banu Bakr would not drive their women if they fled. He started dismembering the animal of his wife’s caravan, then, he continued so that it would be impossible for the women to flee riding camels if men fled. He shouted: let each of you know that if any of you flee, he would give his wife to be a captive. Fight between too close ends either victory or death. Take the initiation to be forceful before your enemy so that you would intensify fighting against the enemy. Then, he made an awning “tent” for himself in Dhi Qar plain, and swore not to return.

Khosrow armies marched carrying the most powerful and plentiful equipment. Then, Hani bin Masoud Al- Shaibani rose, as he became convinced of the fighting necessity. He sent words implying wisdom composure saying, that caution does not stop fate and patience is a victory method. We may die but never live with disgrace. After that, women voices rose up prompting to have courage and bravery. An Ajli woman shouted:

When the Persian army approached with elephants, one of the Persians came out and challenged the Arabs to a duel. It did not take long until an Arab knight confronted him and snapped his neck. Hammers became angry and went himself challenging to duel. An Arab knight, called Al- Hofzan, confronted him and killed him. Persian army was shocked so some people walked away but most of them returned. They drew water for half a month. Then, Persians came to them and fought them at the well area until Persians were dying of thirst so they fled but Arabs followed them and killed them. When the thirst of Persians have become very severe, they went to Dhi Qar plain. Some Arabs who were with Persians pined for their people so they intended to join them, who were Iyad tribe that was with the Persian army. Iyad people were valiant and defeated Persians many times. Before Iyad people joined the Persians as mercenaries, they sent to Banu Bakr asking: Which is better for you, joining you at once or waiting for the intensification of the battle, then, we would move to your side? Banu Bakr replied: we would rather you move in the midst of the battle as it would be more weakening and shocking to the enemy.

Iyad tribe retreated from supporting the Persians in Dhi Qar, and their zeal turned the battle scales in favor of the Arabs.

When both sides encountered in the battle Banu Iyad joined Banu Bakr during the heat of the battle. Persians could not keep pace with the Arabs so they were defeated by Arabs for the first time. That was an incentive that rose the self- confidence of the Arab tribes and emboldened them to confront the Persians. Thus, Dhi Qar battle was a surprise to Persians, as it was a surprise to the Arabs themselves.

Al- Tabari mentioned in one of his Dhi Qar narrations: “That people deliberated (as they demanded that one become their commander). They made Hanzala bin Tha’labah bin Sayar Al- Ajli their commander as they regarded him as a good man. He said to them, I see nothing but war. They obeyed his order and he took charge of the fighting. He led his people “Banu Ijl” during that fight so he had the largest share of it”.

Hanzala took the position of Hani bin Qabisa bin Hani bin Masoud, the head of Banu Bakr during the battle that took place in Dhi Qar where the well (hole) was located. Hani was urging hearts to fight during the attack on the Persians on the day of Dhi Qar well, surrounded on his right by Yazid bin Mashar Al-Shaibani, and Hanzala bin Tha’labah bin Sayar Al- Ajli was on his left protecting him from any side attack from his left.

As for Yazid Al- Sakuni, who was an ally of Banu Shayban, he ambushed with his people from Banu Shayban in a place in Dhi Qar. When Iyas ibn Qabisa came with the Persians to that place, he went with people who were with him in a sudden attack on Iyas and his followers. Iyad left in defeat. Thus, he hugely helped to defeat the Persians.

Some historians said that the main war was fought against Banu Shayban and the war commander was Hani bin Masoud while Hanzala was the mastermind. However, after studying the various narrations, it becomes clear that Hanzala had a more important and greater role in the fighting than Hani. Some narrations even mentioned that he managed the fighting after Hani; people made him in charge after Hani in the battle of “Dhi Qar well”; it was him who killed “Jalabazin”; and that “Ijl battalion” did a great job in that battle until it ended with the defeat of the Persians.

Banu Bakr seized most of the Persians at Iyas ibn Qabisa and captured their money. Women exchanged presents of musk on trays of gold and silver. That battle was a great victory for the Arabs, during which Khosrow and his people suffered adversities. Arab poets competed to commemorate the great victory within poems bearing witness to the wonders that the Arabs would do if they united.