Ahmed I fell in love with her, and she ruled the Ottoman Empire for a quarter of a century. Anastasia, the Maidservant, and the Lover Sultan 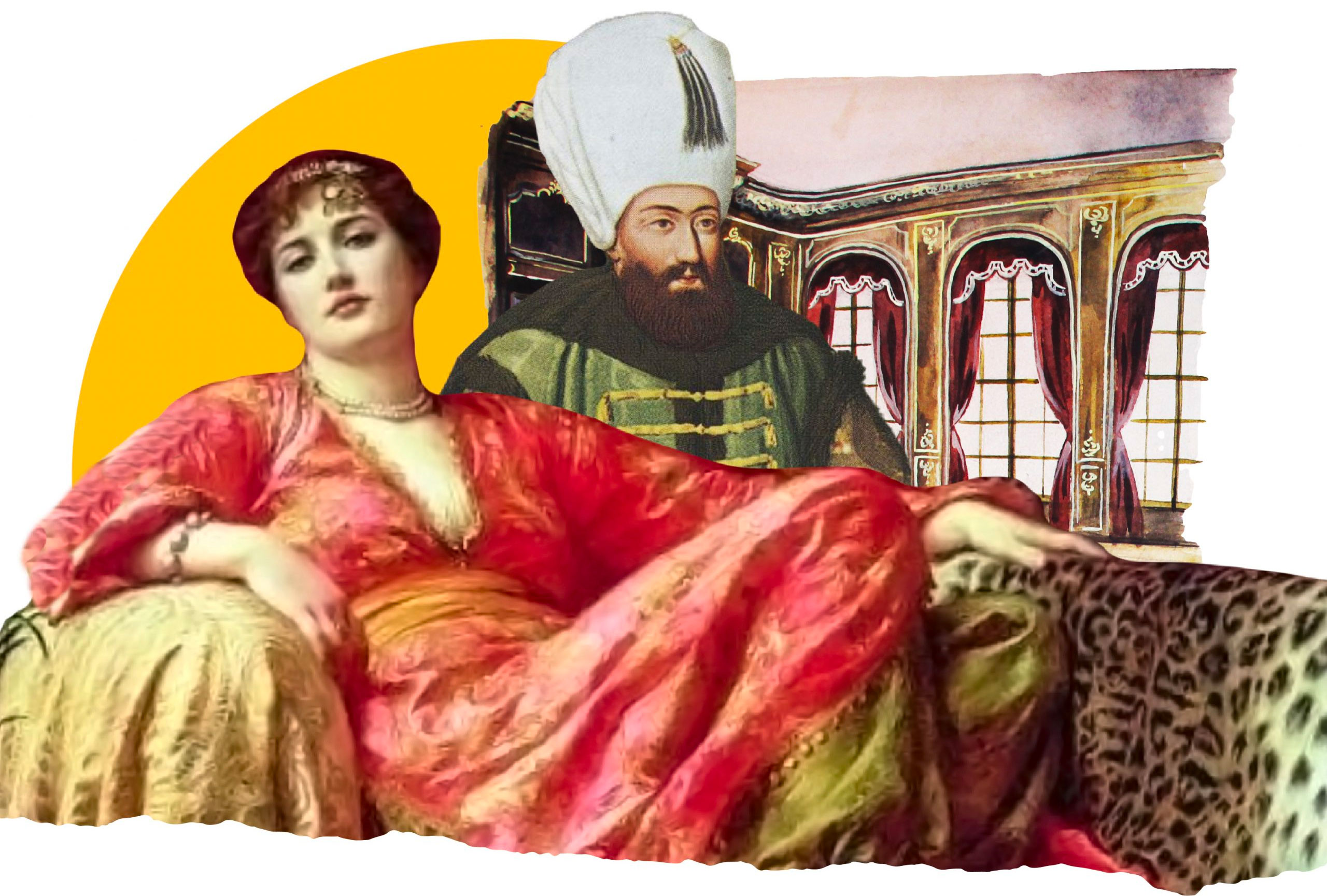 Ahmed I fell in love with her, and she ruled the Ottoman Empire for a quarter of a century

Anastasia, the Maidservant, and the Lover Sultan

How can love be considered as an exception, and that a man falling in love with a woman is an event that deserves to be tackled by historians in order to reveal the side scenes and record the events as if they have found a precious treasure!

However, in fact, the astonishment will fade if the one who fell in love is an Ottoman sultan. The presence of someone, who realizes the value of love, among The Ottomans who professionally shed blood; enslaved all women, men, and children; and encouraged immorality as well as dissoluteness is a precious treasure that deserves all this. Nevertheless, the hero of the love story has quickly gone as if the palaces of the Turkish sultans cannot bear to witness any noble sentiment.

The hero of the most famous love story was Sultan Ahmed I (1590- 1617) AD. The man was a little different from his grandparents and his fathers. On one hand, as clarified by the historical narratives, Sultan Ahmed I was a leading figure, however, in any case he was a dictator who unilaterally made Ottoman political decisions. This has led to some kind of calmness during his reign, especially after he has succeeded to impose constitutional custom that stated to give power to the elder and most wise crown prince. This happened after Turkish sultans have left power to the strongest men what resulted in massacres among brothers. Nevertheless, what Sultan Ahmed I has done did not last long after his death.

Sultan Ahmed I was also different from his grandparents regarding his view of Harem, which refers to domestic spaces reserved for maidservants and wives of Turkish sultans. He was the least one interested in it but this does not mean that he was indifferent to women as clarified by historical resources. Sultan Ahmed I was worried because Harem role became deep rooted in Ottoman Empire until it became the actual headquarter of ruling.

However, irony, perhaps the requirements of legendry love stories, was that the man who had that vision which was somewhat correct was the same man who fell in love with Anastasia, the maidservant, who was born in Greece, specifically in the Island of Tinos to a Christian family. Her father was an orthodox monk. Since her childhood, Anastasia had great beauty which drew the attention of Bosnia governor who purchased her from a person named Mr. Biller. Then, he sent her to the Sublime Porte in Istanbul as a kind of courtesy towards Turkish sultans who were very pleased with these presents.

The little girl did not realize anything inside “Topkapi” Palace where she settled in the beginning. Everything around her was luxurious and frightening. Every door hid secrets behind which were difficult to know. In the midst of all this, a young man saw her for the first time. He was Prince Ahmed who could not believe that there was such utmost beauty. He soon included her within his women and changed her name to be “Mahpeyker” which literally meant “Moon Face”.

Until that moment, Moon Face was merely a maidservant who mesmerize the prince. Nevertheless, the man who was worried about the increasing role of Harem became fond of going there to see her and listen to her talks and stories. One of the basics of raising maidservants was to teach them storytelling in order to entertain Turkish sultans. Prince Ahmed shortly fell in love with Anastasia, then, he became the talk of the ruling palaces and the jesting entertainment of women inside Harem rooms.

The British historian, Philip Mansell, mentioned a description in his book “Constantinople – City of the World’s Desire” that Sultan Ahmed I was obsessed with the love of his maidservant, Anastasia; in spite of the available temptations and the pressure of his mother “Handan” to leave her, especially that the Sultan was married to Mahfairouz who died in early age in mysterious circumstances.

The lover Sultan did not care about any pressures. He kept following his heart that was attached to the Moon Face. She became his moon and sun. He stayed in Harem for days, as he did not want to leave her. The matter shortly ended when Anastasia declared that she converted to Islam, then, she married Prince Ahmed who became Sultan and she became Sultana.

Although historical narratives indicate that Sultan Ahmed I was sincere in his love and that he was one of the few Turkish sultans who had genuine love relationships, other historical resources clarify that Anastasia, whose name became “Kosem” after she had married the Sultan, was not that innocent. Turkish historian, Yilmaz Öztuna, described Kosem as an exceptionally clever woman. However, she was also cunning, evasive, and she mastered making multifaceted political plans and conspiracies. She was also influential with persuasive talk. She has placated the people a lot to achieve her ambitions.

On the part of Anastasia, it was not pure love but she has won the heart of the Ottoman Sultan Ahmed I according to historians due to two advantages which were the glamorous beauty and her sensibleness. It is rarely to find one woman endowed with such qualities inside Harem of Ottoman palaces. The French historian, Madeleine Angélique Poisson (1684- 1770 AD), described the love story in her book titled “Anecdotes or Secret History of the House of Ottoman” saying that it was more like an affection that brought together two children who grew up and were raised together.

The beautiful charming woman was distinguished by cunning, slyness, as well as making political plans and intrigues.

Kosem gave birth, from Ahmed I, to Murad IV who took the Ottoman throne later. However, until 1617 AD, the role of Kosem Sultan regarding the government affairs was only advice and intervening in the state affairs within limits. In the palace of Ottoman rule, she was still the beloved woman, and wife of Sultan. She was the mother of Sultan’s crown prince, as well.

However, in 1617 AD, Sultan Ahmed I died at the age of twenty- seven. Upon his departure, Kosem was preparing for another more powerful role. That role made her sit on the throne of Ottoman Empire for a quarter of a century through which she could unprecedentedly clutch all the ruling affairs.

The beloved woman quickly changed her face. Since she entered the ruling palace, she was ignorant of its features until she became the Valid Sultan, which was the most important position inside the Ottoman Empire according to the Ottoman protocols. Kosem did not lack any skill. As soon as Murad IV, her son, took the power (1623- 1640 AD), she started making strong relationships with the most important departments of Ottoman Empire topped by the department of Grand Vizier and Sheikh Al- Islam, as well as Aghas lobby. If anyone opposed her, she incited Sultan Murad IV against him to remove him from his position. Little by little, those who aspired to positions knew that the starting point is Kosem Sultan. Thus, she had the most important leaders of Ottoman Empire in her hands who owed her allegiance.

She has ruled the Ottoman Empire for a quarter of a century during the era of her two sons and grandson.

On the other hand, Kosem Sultan worked to create a popular base for her through charity foundations on which she spent some of her money. With regard to the money of Kosem Sultan, some historians indicate that she has amassed fortune that exceeded that of the Pashas of Ottoman Empire. She seized so many lands. When she died, all this money has gone to the treasury of Ottoman Empire.

That was the case until the death of Murad IV whose official deputy was Kosem Sultan. She also continued her route during the reign of her second son, Ibrahim I (1640- 1648 AD).

However, things changed a little when her grandson, Mohammed IV, took power (1648- 1687 AD). At the time when Kosem Sultan was still controlling everything in the Ottoman Empire from appointing governors to Grand Vizier, and sometimes she controlled sending military campaigns, there was a new Sultana. She was Khadija Tarkhan, the mother of Sultan Mohammed IV.

In order to show the character of Kosem Sultan, the gentle mistress who became the sole ruler of everything, Kosem Sultan decided to assassinate her grandson, Mohammed IV, because his mother Khadija Tarkhan was not friendly to her, unlike the mother of her other grandson, Suleiman, whom she wanted to take the power after killing Mohammed IV.

Such heinous crimes from a grandmother to her grandson was not something strange to the palaces of the Ottomans which witnessed the massacres of brothers against brothers, and of fathers against sons. For the sake of the throne, any life can be taken.

Khadija Tarkhan, the mother of Sultan Mohammed IV, knew what Kosem was thinking of, so she preempted the matter as she used her influence to persuade the head of Harem Aghas to assassinate Kosem Sultan. That was what actually happened on Sep. 4, 1651 AD when slaves entered the ward of Kosem Sultan. They executed her by strangulation when she was at the age of 62. She was buried beside the tomb of her husband, Sultan Ahmed I, in a region called “Sultan Ahmed”.

Khadija Tarkhan plotted the assignation of Anastasia due to the rule conflict.