English historian Rodrick Owen: Facts and fairness require it to be called “The Arabian Gulf” 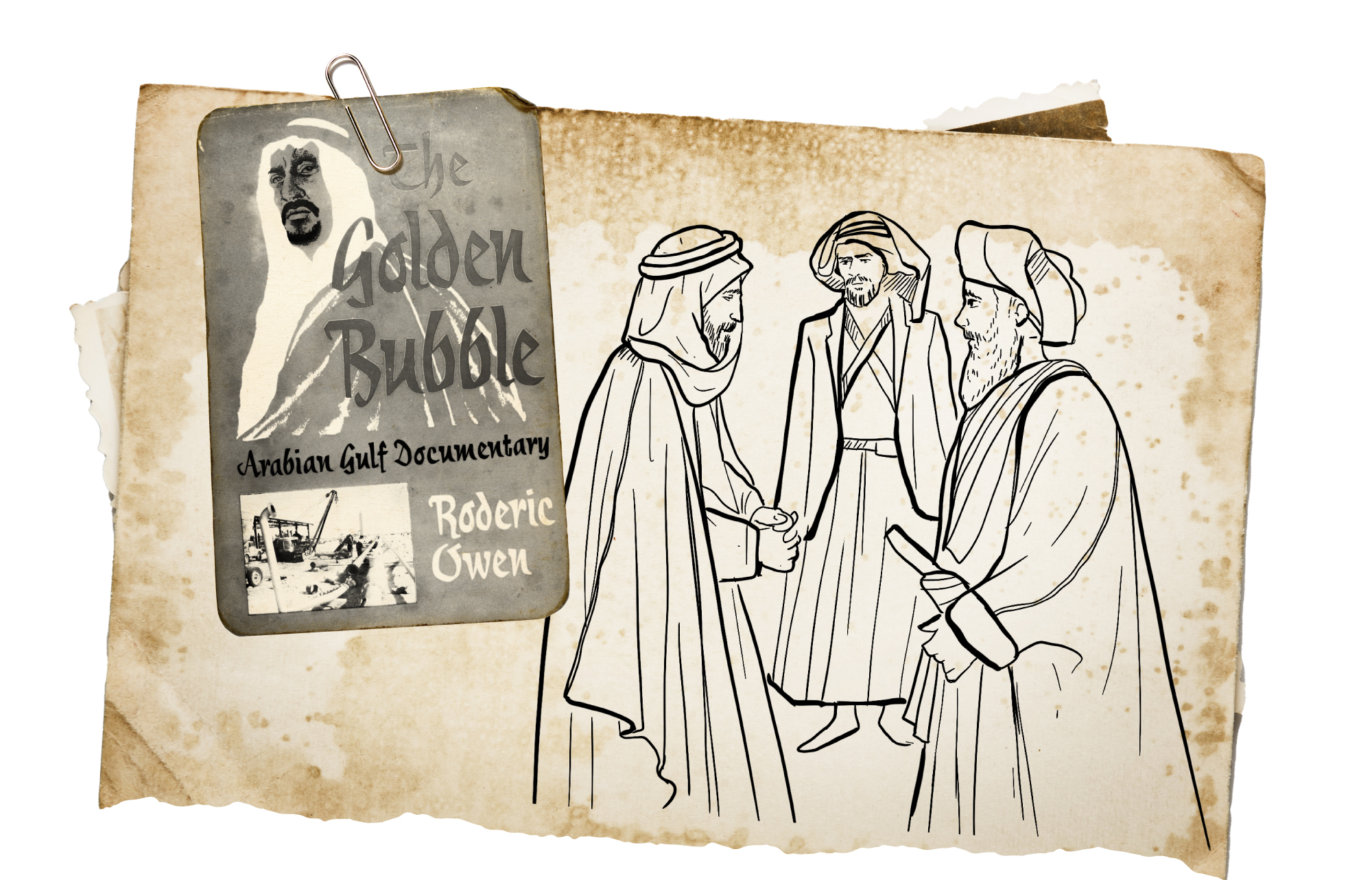 Facts and fairness require it to be called “The Arabian Gulf”

The Persians used to treat others from the neighboring peoples with arrogance and haughtiness, especially the Arabs. Iran believes that it has the right to control the Arabian Gulf and considers its western coasts that they were colonies belonging to the Kingdom of Persia before Islam. The Persians also insist on calling it the Persian Gulf, and they falsely claim that this is the only name for the Gulf, even though the inhabitants of the western and eastern coasts of the Gulf are authentic Arab tribes that have been distributed on its banks since ancient times in the form of coastal cities and sea ports. In addition, we can point out that the Arabs control the deserts that overlook it. If we deeply discuss the true name of the Gulf, we will find that the Arabs in the past called it the Gulf of Al-Basra, the Gulf of Oman, the Gulf of Bahrain, the Gulf of Al-Qatif, Al-Qatif Sea and the Gulf of Al-Ahsa, because these places used to take it as a starting point for ships passing through its gates and controlling its waters, and from it they communicate with the world, east and west.

In fact, the Arabian Gulf has been called by many names throughout the ages. The oldest name by which the Gulf was known is “The land of God” three thousand years ago, then it became known as “The Great Sunrise Sea” until the second millennium BC. It was also called the “Chaldean Sea” in the first millennium BC, as the Chaldeans had a kingdom in Mesopotamia. The Assyrians and Babylonians also called it “The southern sea” or “The lower sea”. In some references, it was also called “The Bitter Sea”.

When referring to some ancient classical historical sources, we find that it was called the Persian Gulf at a certain time in history, not because of their right to that name, but because geographers and travelers at that time did not know what was on the western bank of the Gulf. The first person to call it the Sea of Persia was Alexander the Great, after the voyage of Niarchos in 326 BC, who returned from India with his fleet along the eastern coast of the Gulf on the outskirts of Persia, where Alexander was waiting for him, as he did not know anything about the Arab coasts from the Gulf. This is what made Alexander call it the Persian Gulf. The one who changed this name in the first century AD was the Roman historian Pliny the Younger, who said that “Al-Muhammara is a city located at the far end of the Arabian Gulf”.

The Persians and the English insisted on Niarchos' mistake when he called it “The Persian Gulf”.

The name of “The Gulf of Al-Basra” dates back to the period of the Islamic conquest during the era of the Rightly Guided Caliph Umar Ibn Al-Khattab, may God be pleased with him. The early grammarians used it, such as Al-Khalil Ibn Ahmed Al-Farahidi (died 160 AH), as well as the Arab geographers such as Yaqut Al-Hamawi and historians such as Khalifa Ibn Khayat and Imam Al-Dhahabi. The name of the Gulf as the Persian Gulf was also common in the Islamic era, especially among the Persian Muslims, to the extent that some used the two names together. In the Abbasid era, some Arabs called it the Gulf of Iraq, but the name “Arabian Gulf” remained in use, as it remained known since before Islam and continued until after Islam among the inhabitants of the Arabian Peninsula and its surroundings. Iraqi historian Mustafa Jawad talks about the Gulf of Al-Basra and says: “The Gulf is the Gulf of Al-Basra, and some Western historians have called it the Persian Gulf because most of those historians and Western travelers wanted to cross it from the Arab side to the Persian side, not the other way around, and the destination is what determines the name. For example, when you are in Baghdad and you want the road that leads to Al-Basra, you call it Al-Basra road, but if you are in Al-Basra and you want the road that leads to Baghdad, you call it Baghdad road. This was the case with the Gulf when its goal was to cross and reach Al-Basra, so the name was Al-Basra Gulf, which is the upper end of the Gulf. As for those who cross it from the Persian side and want the Arab side, it is Al-Basra Gulf, especially for the general population of Persia, India and the areas of present-day Pakistan. Most of what is narrated about the region is related to pearling, shipbuilding, fleets that pass through the Gulf, ancient and modern, to India, China, Indonesia, the Philippines, Solomon Islands, bringing timber from Java (Jawa), and many more. The populations of India and Pakistan still maintain some relations between them and the people of the Gulf, the region and Al-Basra”.

In the middle of the eighteenth-century AD, the traveler Carsten Niebuhr toured Arabia, passing through the Gulf, and said: “I cannot pass silently on the more important colonies which, though established outside the borders of Arabia, are closer to it. I mean the Arabs inhabiting the southern coast of Persia. They are often allied with the neighboring sheikhs or subject to them. Different circumstances indicate that these tribes settled on the Persian Gulf before the conquests of the Caliphs and have always maintained their independence. It is funny that our geographers make a part of the Arab countries as if it is under the rule of the Persian kings, while these kings were never able to be masters of the sea coast in their own countries, but they endured patiently and reluctantly that this coast remain the property of the Arabs”.

Whoever traces foreign documents, whether British or French, will find that there is a clear colonial competition over the name of the Gulf. The British called it the Gulf of Persia, while the French called it the Arabian Gulf, which is what Iran followed, which had friendly relations, agreements and common interests with the British, and proved what the British colonialists had proven. If the French had the upper hand, they would call it the Arabian Gulf, in line with what those powers wanted. In the twentieth century, some Western researchers began to abandon the Persian name of the Gulf, including the English historian Roderic Owen, who visited the Arabian Gulf and published a book about it in (1957 AD). His book was entitled “The Golden Bubble: Arabian Gulf Documentary”. In it, he narrated that he visited the Arabian Gulf and believed that it was a Persian Gulf because he had only seen this name on the geographical maps, but when he closely saw the Gulf, he was sure that it would be more correct to call it “The Arabian Gulf” because most of the inhabitants of its coasts are Arabs. He said: Facts and fairness require it to be called “The Arabian Gulf”.

In his book Frontiers and Borders, the French writer Michel Foucher sees that the Gulf, which was called the Persian Gulf because of the strong and historical influence of Iran, found support from the American strategy at the time of the Shah based on supporting the Shah and his army to achieve regional security in the protection of oil. The dispute between the Arabs and the Iranians is not just a verbal or nominal dispute, but rather a dispute that reflects a political and national struggle of strategic dimensions for the sake of domination over the Gulf, its waters, islands, oil, strategic locations, security and wealth. In fact, this is in line with Iran’s real desire to dominate the Arabian Gulf by controlling its waters, oil and strategic locations.