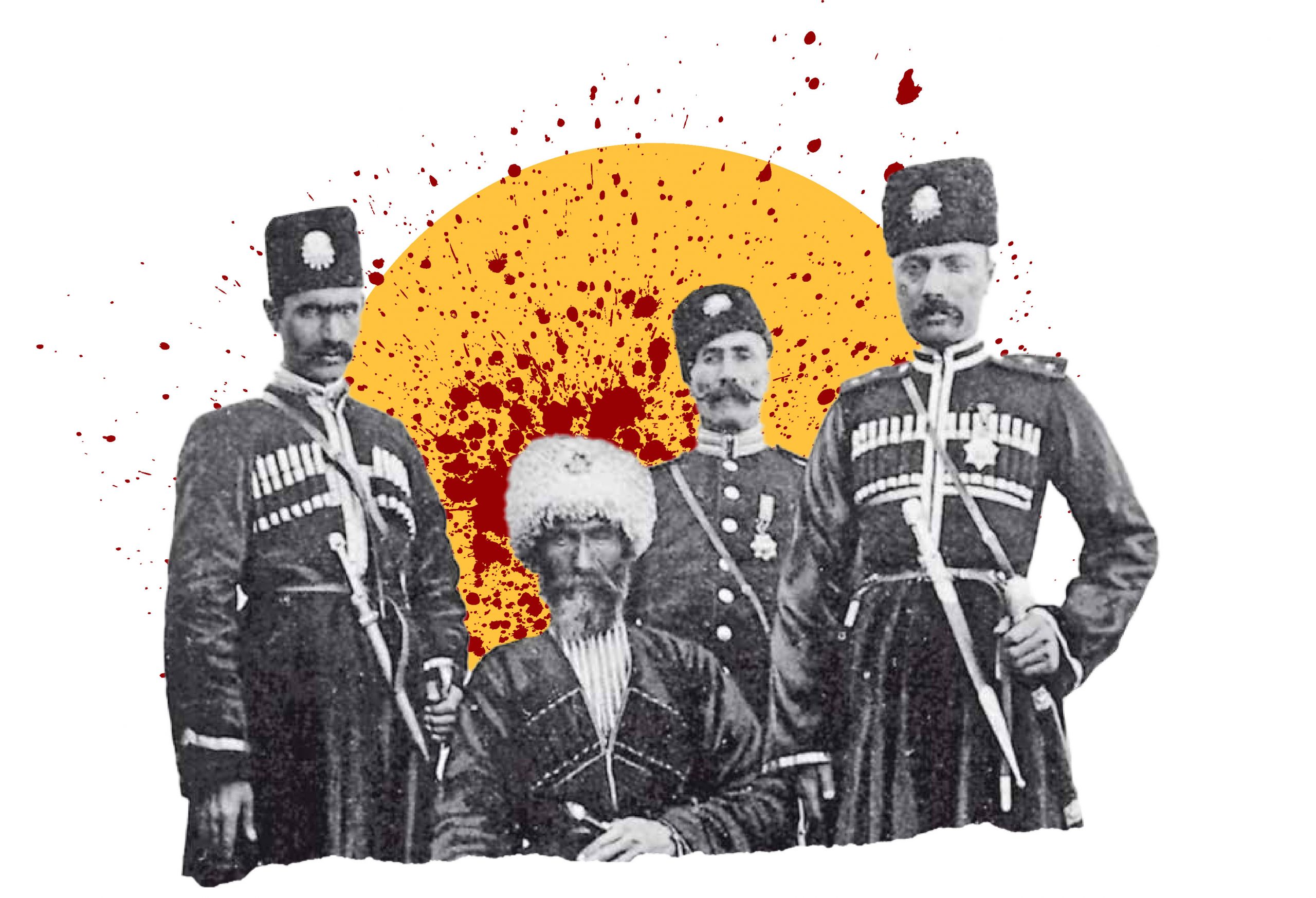 He organized his "knights" to kill innocent people

The Ottomans placed non-Turkish races in a second degree after the Turk, regardless of affiliations and beliefs, as race was the basis of social status. An exception was made for the Jews, as the Ottomans treated them well from an early period, because of their economic benefit. The Armenians did not enjoy what the Jews did, despite the danger that the Jews represented, which led to the end of the Ottoman Empire.

Armenians have their origins in the Indo-European race, as they arrived in their lands BC immigrants from Cilicia , Syria and Iraq, and lived in the land that witnessed historical events of conflict between neighboring empires. When the Ottoman Empire was established at the beginning of the fourteenth century AD, it expanded in Anatolia to include most of the land inhabited by the Armenians. During the Ottoman-Persian War (1616-1534), the lands of the Armenians were divided into: Eastern Persian Armenia, that later on became Russian Armenia after the Russians seized it in 1828, and on the other side there is the Ottoman Western Armenia.

Armenians enter the Ottoman millet system, and they played a major economic role in Istanbul and in several fields: agriculture, industry and trade. Some of them engaged in government jobs, while the Armenians of the cities far from the Ottoman capital lived in poverty and ignorance, and were burdened by taxes, which were collected in a cruel and humiliating way by the Ottoman Turks. Despite this, the Armenians were most loyal to the Ottomans, which made the Ottomans call them the honest community.

In addition to the national spirit that spread during the last centuries of the Ottoman history, specifically at the beginning of the nineteenth century; Political and national ideas leaked out among the Armenians like other peoples and nationalities. This coincided with the entry of the Ottoman Empire into a weak stage in its systems, administration, and power. At the beginning of the reign of Abdul Hamid II, the Russian-Ottoman war broke out, and due to the weakness of the Ottomans, they lost to the Russians and concluded the Treaty of San Stefano with them. Article (16) of the treaty dealt with the need for the Ottoman Empire to undertake reforms in the Armenian provinces, and to protect them from Kurdish and Circassian attacks.

Global anxiety escalated after German Chancellor Ottophon Bismarck “Otto von Bismarck” called for the Berlin Conference to be held in the presence of an Armenian representation headed by the Patriarch of Istanbul Khremiyan to demand their rights in front of public opinion. Although the Armenian issue took on an international dimension; However, Abdul Hamid II took a solid decision towards it, as he refused any reforms or responses to the Armenians, so the Ottomans ignored the implementation of international treaties.

Abdul Hamid II pursued a policy of repression and tyranny, in light of the international powers’ preoccupation far from the Armenian issue, which forced the Armenians to activate their national movement by establishing revolutionary associations, which had active propaganda, calling for guerrilla and revolution against the Ottomans, and Russia was in support of them.

The Ottomans, headed by their Sultan Abdul Hamid II, nicknamed (The Red Sultan), confronted the Armenian national movement on two levels: On the social level, by endeavoring to settle the (extremist) Muslim clans side by side with the Armenian revolutionaries in Eastern Anatolia, and completely disregarding the crimes and abuse they commit against the Armenians, and on the political level by establishing an integrated project known as the (The Hamidiye Cavalry) that were formed from the Kurds to eliminate the Armenian national movement, with the aim of suppressing them, and salvation from their race that inhabited the lands of the Ottoman Empire. With this reckless and extremist behavior by Abdul Hamid II, the Armenian issue in the Ottoman Empire reached a critical and brutal juncture that escalated during (1894 – 1893), in which the massacres and ethnic cleansing operations against the Armenians were committed in a manner that had not been seen before.

The excessive brutality with which the Ottomans dealt against the Armenians was accompanied by the imposition of unfair taxes on them, and they subjected them to many types of manifestations of belittling, persecution and slavery. They referred to them in Turkish as “gavours” to insult them, meaning “infidel,” while they did not use the same name against other non-Muslims, especially the Jews. The Armenians were also prohibited from building their places of worship, and legal restrictions were imposed on them, such as preventing them from carrying weapons or riding horses and camels, and their homes could not be higher than the homes of the Turks.

He made the Armenians citizens of a lower class with the rank of "infidel".

This is in addition to what was deliberately provoked by Ottoman officials from revolutions in the densely populated Armenian cities, such as Sasson in (1894) and Zeitoun during the period (1896-1895). The Hamidiye Cavalry were increasingly using violence to deal with Armenians through persecution and pogrom. On the other hand, the Armenians resisted some of the cavalry attacks and succeeded in repelling them.

In May (1895), the European powers forced Abdul Hamid II to sign new reforms aimed at reducing the powers of The Hamidiye Cavalry, but they were not implemented, such as the Treaty of Berlin. In October of the same year, 2,000 Armenians met in Istanbul to petition to implement reforms, but Ottoman police units violently dispersed the gathering. After that, massacres broke out against Armenians in the capital Istanbul itself, spreading to the rest of the regions, especially the districts inhabited by the Armenians in Badlis, Diyarbakir, Erzurum, Harrods, Sivas, Trabzon and Van “Wanê”.

Statements differ about the number of Armenians who were killed, while European documents of the massacres, which became known as The Hamidiye massacres, put the numbers between 100,000 and 300,000 people who died in the massacres of Abdul Hamid II.

During his reign, more than 300,000 Armenians were killed in the so-called purges.

Abdul Hamid II is accused of being the first to carry out massacres against Armenians and other Christians who were under the rule of the Ottoman Empire. During his reign, The Hamidiye massacres were carried out, where hundreds of thousands of Armenians, Greeks and Assyrians were killed for various economic and religious reasons, and the liquidations were between the (1896-1894).

The Ottoman bank was seized by a group of members of the Armenian Revolutionary Union and this happened out of frustration with European indifference to the massacres. This incident brought greater sympathy for the Armenians in Europe and was praised by the European and American press, which denounced Abdul Hamid II and depicted him as the “great murderer”, “the bloody sultan”, and the “unjust ruler”. The major powers pledged to take measures and impose new reforms, but this was also not implemented due to conflicting political and economic interests.

That incident led to an attempt by a member of the Tashnak organization to assassinate Abdul Hamid II in 1905, by blowing up his vehicle upon leaving the mosque. This incident also led to the revolution of the Young Turk movement in (1908), which overthrew the Sultan himself, in addition to other massacres in Cilicia , such as the Adana massacre in which about 30,000 Armenians were killed.

3) Arnold J. Toynbee, The Armenian Massacres or the Assassination of a Nation, translated by Joseph Calustian (Lebanon: Zgheib Press, 1997).

7) Naeem Al-Yafi, The Armenian massacres and the reaction of the Arab public opinion towards them, (Lattakia: Dar Al-Hiwar for Publishing and Distribution, 2000 AD).