He rebelled against the laws and he was loved by the Sultan’s favorite concubine Nadim Agha, a lover who shook the throne of Abdul Hamid II 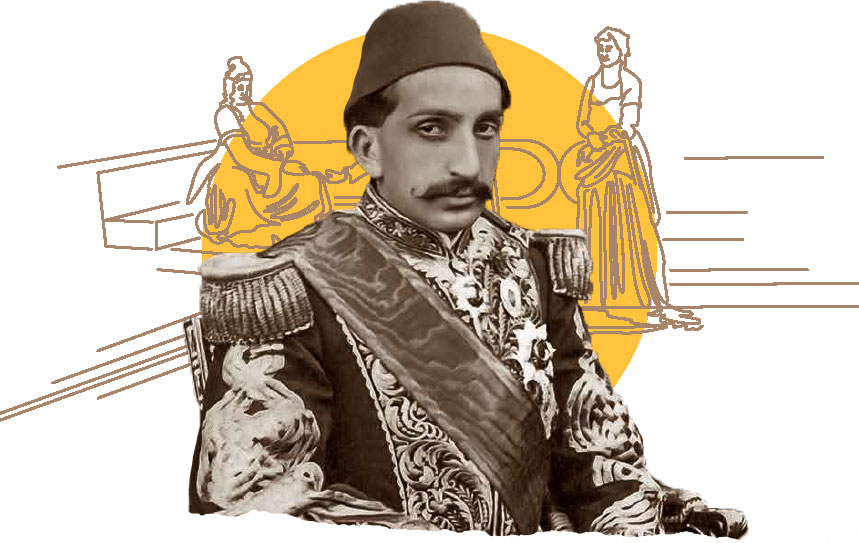 a lover who shook the throne of Abdul Hamid II

How can you convince men who, never experienced any human feelings in their entire lives, with love; rather how to convince murderers who have committed indecency and spread immorality and depravity, that a person is not just lust, but is a heart that feels, a mind that thinks, and a will that revolts against all laws.

Unquestionably, no one was able to convince the Ottoman sultans of anything. Ever since they came to power, they enacted the laws of enslavement, so they took for themselves thousands of concubines and locked them up in certain places in the sultan’s palaces, called the “Harem.” As for those who serve these women, men who have been specially eunuched for this purpose, in what was known as the most heinous crime known to mankind and forbidden by Islam.

The Ottoman sultans believed that with such iniquitous laws and heinous crimes, they could own the people, but because Man is not just lust, and no oppressor, no matter how tyranny he might be, can own hearts. A lot of love stories occurred between the “Aghas of Harem”, which was a title for the men who were eunuched to serve in the “Harem” and concubines of the Ottoman sultans; some of these stories were untold, others were revealed and their details were known, as happened in the story of “Nadim Agha” and his beloved “Zbarjad”.

The story goes back to a young child among millions of children born during the reign of the Ottoman Empire, who found nothing but hunger and oppression, citizens had no education or a decent life. Soon enough, his misfortune got him into the hands of the brokers of the Ottoman sultans looking for children fit to serve in the “Harem”, and undoubtedly, they are to be eunuched before that.

Nadim Agha attained a great position according to the laws of the Ottoman palaces, as he became responsible for inviting the concubine who was chosen by the Ottoman Sultan to spend the night with. Nadim Agha used to perform that task perfectly, without caring about the concubine’s flirtatiousness and dalliance as he was eunuched, so he was harmless.

On the other hand, there was a beautiful black girl called “Zbarjad” brought by the slave trader Othman Bey Al-Kurdi, and she was sold out for 100 gold pieces, concubines at that time, were not worth that much; but Zbarjad had a nice look and her eyes were glamouring, which made her worth such big amount. when Sultan Abdul Hamid II saw her, he was fascinated and ordered the Aghas of the “Harem” to give her a special place.

Abdul Hamid II fell in love with Zbarjad the concubine, and granted her a special place among the women of Harem.

Historical narratives elucidate that the first meeting in that love story that shook the palace of the Ottoman Sultan Abdul Hamid II was on one of the winter nights in 1897, While Nadim Agha was carrying out his daily work of bringing concubines to the Ottoman Sultan, he found that concubine with whom he shares the dark-skin. Soon enough, he was mesmerized by her beauty and the privilege she received in the “Harem”, and the first feeling Nadim Agha had for that black girl, was pride, as she surpassed the white and blonde women of the Sultan.

Due to such pride, Nadim Agha hastened to serve her, but what happened was unexpected, without digging into the mind of the Ottoman Sultan Abdul Hamid II. It is true that he eunuched Nadim Agha and deprived him from his manhood, but he did not take his heart and his human feelings away, so he loved Zbarjad and the girl loved him back; love does not recognize masters and slaves, or weak and strong.

At that time, Zbarjad told Nadim Agha how criminal slavers raided her village in Zanzibar and took her to be sold in the slave markets, which the Ottoman sultans greatly promoted, as part of the policy of enslaving the people.

The relationship between the two lovers evolved and was strengthened by this oppression and hunger that the two lovers experienced in their childhood; Zbarjad also saw him as a companion who shared her misery and infelicity.

Poverty, hunger and aversion to enslavement to the Ottoman sultans were what brought Zbarjad and Nadim Agha together.

Nothing disturbs the peace of people except injustice, especially if the Ottoman sultans were the source of such injustice, who mastered it and created multiple forms of it. On a sad day, the Ottoman Sultan Abdul Hamid II asked Nadim Agha to bring him Zbarjad to spend a night with her and ordered him to make her go through the sultan’s rituals by washing and wearing specific garments chosen by the Ottoman Sultan.

Suddenly, the lover found himself forced to deliver his beloved as a gift to a beast who cares for nothing but women’s bodies, and he could not refuse or else their relationship would be exposed and both would be put to death according to the Ottoman laws that do not give human life any value, or accept that and live with a shameful feeling that devours him every single day as he imagines his beloved in the bed of Abdul Hamid II.

In that state, as he was hallucinating, he met his beloved, served the sultan’s word and dropped in her lap heavily crying, and Zbarjad realized that she might destroy her beloved, so she pulled herself together in a rare situation and she tried to calm him down and remind him that this is her duty in the “Harem” and they do not have the power to refuse, but Nadim Agha’s manhood, that has nothing to do with castration as the Ottoman Sultan Abdul Hamid II thinks, rose up and he refused to deliver his beloved in such servile way, saying: “You will not go to him, he can imprison me, flog me, or throw me into the water, to the whales of the Bosporus, to die, but I shall never imagine you in the arms of another man messing with your body.

Such rampage that took Nadim Agha over but it did not control Zbarjad, who tried to make him change his mind because the fate will be death, and during the discussion and violent argument their voice rose and the rest of the concubines and one of the Aghas of the Harem, a colleague of Nadim Agha in his work, arrived; and their love story was revealed, so Nadim Agha’s colleague rushed to tell the Sultan everything.

But Zbarjad caught Nadim Agha’s colleague moving, so she ran to him to prevent him from going out and telling the Ottoman Sultan Abdul Hamid II. At that moment, Nadim Agha thought that Zbarjad was trying to escape from him, so he took a pistol and fired a bullet that settled in the body of his colleague “Agha”, and he fell dead and shouts and screams were heard from far and wide.

Sultan Abdul Hamid II waited for Zbarjad for a long time. As per usual, he wore a white dress and sat in his bed listening to his spies as they tell him about everything that happened in the palace, while inhaling some stimulants, from time to time, in the middle of it all, he was shocked when he saw Nadim Agha bursting into his bedroom and standing before his bed holding a pistol, shouting: “Order them to kill me, my lord.”

Abdul Hamid II was shuddered when he saw Nadim Agha sneaking into his room and fled to secret doors made for escape.

At that moment, Abdul Hamid II was taken over by fear of this man holding a pistol and standing on the edge of his bed, so he pressed a button behind his bed, and a secret door opened, and he quickly exited, trembling; fleeing from Nadim Agha.
As the story of the two lovers started with misery and oppression, yet the end was more miserable and oppressive, as Nadim Agha was killed and hanged in one of the public squares, while Zbarjad was found hanging herself and following her beloved to the after-life, fleeing from an Ottoman sultan who does not realize that humans have hearts and a life, and no one has the right to own it except the Creator.

Abdul Hamid II ordered that Nadim Agha to be hung in a public square, then Zbarjad committed suicide to follow her beloved.