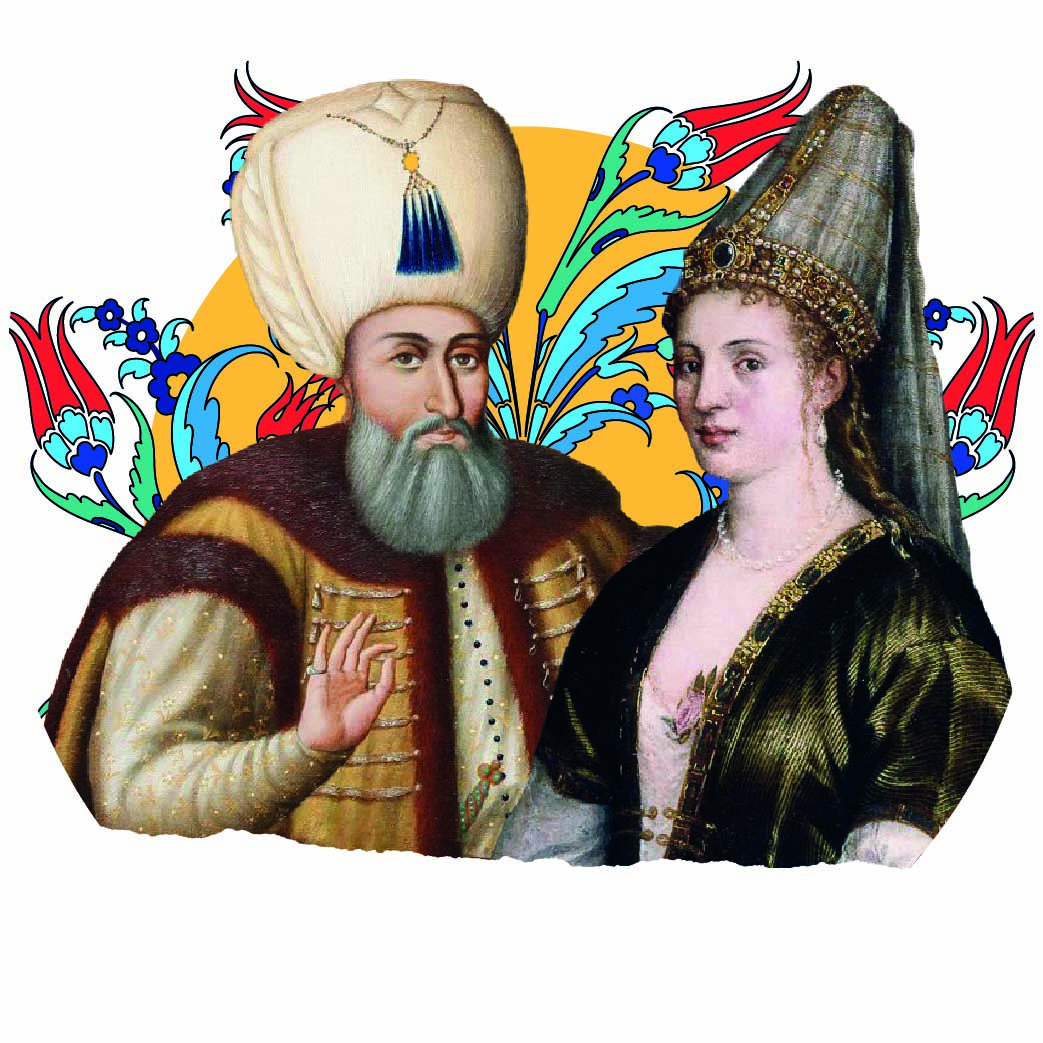 From slave Markets to the head of the Ottoman Empire

Sultanas in the Haremlik who ruled in the shadow

History tells us that every country had men working in the shadow, who do not have official posts in the state and do not appear much in public, but in secret they manage and control the fate of the country and the people.

This phenomenon may have been resorted to by the leaders of the countries to find a last resort when the officials fails to come out with solution, thus it was justified, but what the Ottoman sultans did, was groundless, because they did not have men working in the shadow but instead; they have women working in the shadow, and these women were only maidservants, who were brought from slave markets from far and wide, and because of the desires of Ottoman family and falling in the arms of the maidservants day and night, the fate of the country became in the hands of the women of the Haremlik, so they controlled the Turkish sultans; arguably, we can say that they became the sultanas ruling in the shadow.

Historical sources indicate that ever since the Haremlik was established during the reign of Sultan Mehmet Al-Fateh (1444-1481), arguably, we can say that such place assigned to the maidservants and women of Ottoman family was the seat of the actual ruling in the country. On the one hand, the Ottoman sultans spent most of their time among their maidservants, and on the other hand, that state of weakness that dominated the Ottoman family tempted these women to release their desires to gain influence and wealth until they became in control of the country.

As for the maidservants, the path was paved for them. It is enough for a maidservant to effectively tempt the Sultan to fall in love with her, and when she delivers a child to him, she is promoted directly to “Kadin”, which is a rank in the laws of the Haremlik that makes her treated as one of the sultanas, and when the son of that maidservant takes the throne, such maidservant becomes the mother sultana afterwards, the most prestige position in the Haremlik, and she is more influential than some of the sultans.

As a result of the multiplicity of maidservants and the infatuation of the Turkish sultans with them, there were always maidservants who had children from the sultans, which ignited the conflict that which of them would her son seize the throne, and because of that many of these women also hatched plots and assassinations in order to secure the position of Sultan for her son.

Some may think that the dominance of the Sultana of the Haremlik appeared in the era of the decline of the Ottoman Empire or the end of its decades, actually, such phenomenon began early to become a political doctrine for the Ottoman family. Historical sources prove that everything started from Sultan Suleiman the Magnificent (1520-1566) AD, who was fond of “Roxlana”, a maidservant of Ukrainian origin and a Christian father, who was captured and became one of the other maidservants in the Haremlik.

In no time, Roxlana became an obsession to Suleiman the Magnificent, and he was mesmerized with her and wrote poems about her. Then that concubine delivered him a son, and she turned into his wife and his first advisor of state affairs. Historians describe Roxlana’s influence making Suleiman the Magnificent unable to abandon her site, to the extent that prompted him to give up the leadership of his military campaigns.

Roxlana, the concubine of Suleiman the Magnificent, the first Sultana of the Ottoman Empire ruling in the shadow

Roxlana did not care about this weakness of the lover sultan, her cunning plans and her strong personality was what prompted her to think about how to bring her son Selim II to power, in this sense, she created a strife between Suleiman the Magnificent and the Grand Vizier Ibrahim Pasha, who was in favor of taking the throne to Prince Mustafa.

Roxlana’s plan worked, so Suleiman the Magnificent dismissed Ibrahim Pasha and appointed Rustam Pasha in his place, who married one of Roxlana’s daughters, then moved to the third step by deluding the Sultan that his son was conspiring against him, and in 1553 AD Mustafa Suleiman the Magnificent was murdered, and after the death of the latter, Sultan Selim II son of Roxlana was crowned sultan.

What Roxelana did, turned into a rule in the Ottoman Empire as rules for killing siblings and starving people. When Sultan Selim II took power (1566-1574) AD, there was a maidservant called ” Nurbanu ” who controlled him until she married him and gave birth to Murad III, who will subsequently rule.

Nurbanu was able to control all the affairs of the Ottoman Empire during the reign of her husband Selim II & her son Murad III, due to her resourcefulness, she allied with the Grand Vizier Sokollu Mehmet Pasha, and the chief of the Aghas in the palace, Ghazanfar Agha, an alliance to which Sultan Selim II and his son Murad III acquiesced.

Such things took a dramatic turn when a maidservant called Safiye appeared, who was bought by Sultana Huma Shah, daughter of Prince Muhammad bin Suleiman the Magnificent, and gifted her to Murad III when he was the crown prince.

Safiye was able to take away the mind of Murad III, who became distracted between his powerful mother on one hand, and his favorite maidservant Safiye on the other. To solve this dilemma, Nurbanu tried to change the fact that Safiye is the favored concubine in the bed of Sultan Murad III; but the latter refused at first before submitting to the will of his mother and accepting other maidservants.

Safiye did not give up easily, so she insisted on staying next to Murad III and was able to give birth to Prince Mehmet Khan, who would later become Sultan Mehmet III (1595-1603) AD. The conflict ended when Murad III’s mother died by poisoning in 1583, and Safiye Sultan became the most influential person within the palace.

In order to know the extent of the crimes committed by Safiye Sultan, A.K.A. the butcher of the Ottoman family. Historical sources elucidate that in order to eliminate any competitor to her son, she ordered that the male princes of the Ottoman family be imprisoned in suites isolated from the world inside the Haremlik, which left grave effects on those who survived afterwards, as they all suffered from mental illnesses as a result of what Safiye Sultan did to them.

Safiye Sultan carried on with her crime while the Ottoman Sultan Murad III was breathing his last, so she ordered the chief of the Aghas, Ghazanfar Agha, to kill the Sultan’s 18 male sons by suffocation to clear the way to her son.

In order to confer the throne to her son, Safiye Sultan killed 18 of Murad III's sons

Same happened with ” Kosem Sultan”, who was sold as a maidservant and turned into one of ladies in the Ottoman family, after she was able to marry Sultan Ahmed I and gave birth to Prince Murad, Sultan Murad IV later.

Kosem Sultan was able to make alliances with statesmen in the palace to secure the position for her son against his brother, Prince Othman the son of a fellow wife and her historical enemy, “Khadija Mahfiruz.”

Kosem Sultan settled the matter in favor of her son. After Prince Othman ruled and became Othman II, she conspired to assassinate him, later on her son Murad, at the age of 11, she took power and ruled the country as the Sultan’s deputy for 9 years until Murad IV reached the age of twenty. Her influence did not end there, but continued throughout the reign of her son.

Historical sources unanimously agree that leaving the Ottoman Empire in the hands of sultanas, who ruled in the shadow, and what they did was one of the main reasons for the fall of the Ottoman Empire and the backwardness that Muslims suffered from, and historical narrations also confirm that there was no sultanate known in history in which women ruled in explicit and dangerous manner as well.

Kosem Sultan managed to assassinate Othman II and rule the country instead.