In the First Persian Hate Speech: Khosrow: “I Saw No Good Characteristic of Arabs” 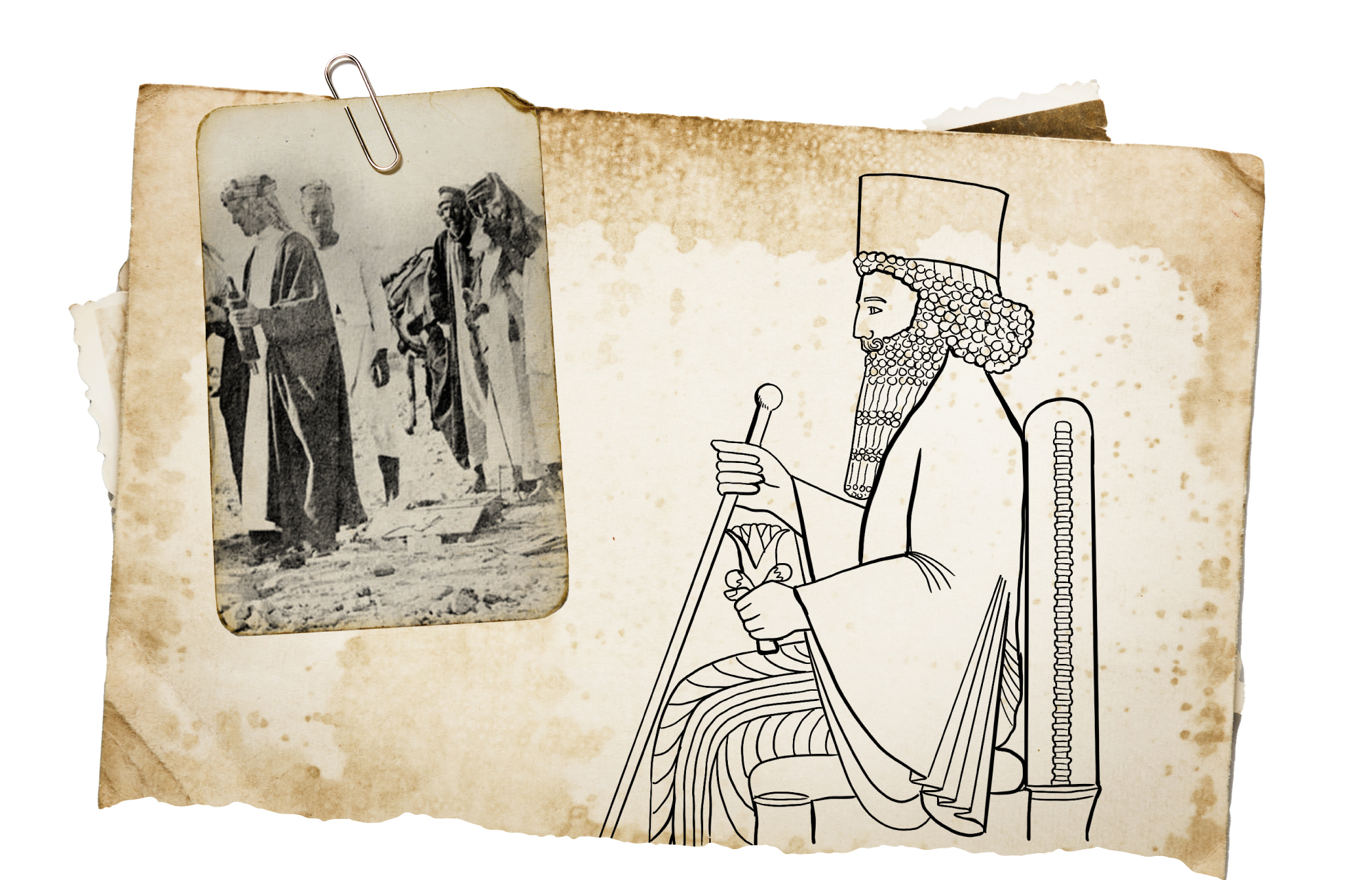 In the First Persian Hate Speech:

Khosrow: “I Saw No Good Characteristic of Arabs”

The mentality of Persian arrogance and hostility against Arabs dominated for a long time, and controlled their mind. They also found that Arabs were uncontrollable rival. Therefore, they based their strategy on the attempt of the subjugating Arabs through direct occupation, agents, or imposing tribute on Arabs to economically exhaust them. This is supported by what was reported by Ibn Al- Atheer with regard to what was done to Kharaj (a type of individual Islamic tax) and soldiers by Khosrow Anushirvan, saying to his assistants: “Force people to pay tribute except for lords, nobles, soldiers, satraps, authors, and servants of the king. Each shall pay the amount he can afford, twelve dirhams, eight dirhams, six dirhams, four dirhams”.

Persians did not deem Arabs as neighbors; they rather deemed them as enemies and inferiors to them. When they were defeated in the two battles of Dhi Qar and Al- Qadisiyah, they went berserk and accused Muslim Arabs of targeting the Persian heritage in the first two centuries after the emergence of Islam and the conquest of Persia, which they called the Era of Silence. This proves that the Persian conscience despises, hates and detests Arabs although the Arab person was the one who brought Islam to the Persians. Otherwise, Persians would have been worshiping fire in the Valley of Persia so far.

The Persian mentality is revealed through an ancient text in which the use of the tribute to control other peoples is explicitly mentioned. The text dates back to the Persian King “Darius”: “I’m Darius the Great- King of the Kings- the King of the lands inhabited by all peoples; the long- standing King of this great land- son of Hystaspes member of Achaemenids– Persian and son of a Persian, Aryan and descendant of Aryans”. He also said, “Thanks to Ahura Mazda, these are the lands, beyond Persia, which I own, and control. They pay tribute to me, do my commands, and obey my law: Media– Susiana- Partia- Hariva– Herat, Bactra (Balkh), Saghd, Khwarazm (Khiva)… India, Babylon, Assyria, Arabian countries, Egypt, Armenia, Cambathokia, and Sparta”. In addition, “when Ahura Mazda saw the lands he entrusted to me- he made me a king, praise be to Ahura Mazda, I have regulated their conditions and my commands are obeyed according to my desire. When I ask myself, how many lands have been ruled by King Darius, I look at this picture: They carry you on the throne, may you know them, you will know that the spears of the men of Ars have gone very far. You will also know that Persians started war far from Persia”.

A research published in Adab Al- Kufa Journal traces the development of the Persian- Arabian relations to the time of the Persian “Cyrus”. It described the relations as full of connections, indicating that in 240, Persians established the Emirate of Al- Hira on Euphrates River near Arabs who were the owners of the land of Iraq and the north of the Arabian Peninsula. Many Arab delegations came to the court of the princes of Al- Hira and learned about the Persian culture and transferred it to their countries. There were also close connections between Persians and Arabs in Bahrain, Oman and Yemen.

Thus, the relation between Persians and Arabs is old, dating back to very ancient BC centuries. It was dominated by the problem of the Persian fear of the development and progress of Arabs. The relation ranged between military, cultural and economic, and Persians intended not to make it based on equality and neighborhood, but rather on superiority and an attempt of imposing guardianship and subordination on Arabs; as they were- in their view – inferiors to them; and because the goal of Persia was to impede Arabs and hinder their progress. This became clear in the second Hijri century, after Persians had managed to control and tighten their grip over the Abbasid State, thus, Arabs turned into hostages to Persian myths, deliberately raising the status of the Persian race and underestimating Arabs. For all these reasons, the populism phenomenon, that targeted the Arab element, spread. Perhaps the era of Abbasid disintegration and decadence that followed was on account of that Persian fascism and its crippling impact on the Arab culture and development.

History Does Not Lie

Shaker Majid Al- Shatri, the researcher, confirmed in his book titled Writing the History of the Persian Empire that Sabur was the one who started his first wars against Arabs in Ard Al- Sawad (the Black Land) or Iraq so he destroyed them by killing and torturing. He deliberately harmed them and evicted them from their country, especially the tribe of Iyad. According to this spiteful situation, Sabur managed to eradicate Arabs. He killed many people of the tribes of Iyad and Tamim. His armies launched extermination campaigns, so some of them fled to Romans; some went to the east of the Arabian Peninsula, then, he returned to Diyarbakir and eradicated them too. After that, he went to Al- Yamamah going deeply into the Arabian Peninsula. In case anyone opposed him, he pierced his shoulders; therefore, he was called Dhul- Aktaf (the one who pierces shoulders). In addition, it is said that he crucified them from their shoulders on the mountains.

Persians... If Arabs did not open their homes, they would have remained worshiping fire so far.

Dr. Jawad also said in his book titled Commentary on the History Of the Arabs Before Islam, “People reporting news mentioned that Sabur was called Dhul- Aktaf only because he pierced the shoulders of Arabs”. He did not regard that it was unlikely that Sabur pierced the shoulders of Arabs. Such cruel and painful torture was well known in those days.

In the book titled The Arabs Before Islam- Their Political and Religious Conditions – and the Most Important Aspects of Their Civilization, the author, Mahmoud Arafa Mahmoud, said, “The caravans of Persians passing through the Arabian Peninsula to the Levant, coming from Egypt to China, were the wealth cause of the tribal leaders who worked for their service, comfort and guard until they safely reached their goals. Goods of Persians were sent to Al- Hira guarded by men from Persia, then, Bani Tamim took over this mission inside the island. They continued proceeding until they left its protection circle to another tribe and so on in exchange for a definite wage.”

Arabs in the View of Khosrow

In a dialogue reported by historians between Al- Nu’aman bin Al- Mundhir, the Arab king, and Khosrow, the Persian king described Arabs, saying:, “O Nu’aman, I have thought about Arabs and other nations, and I considered the status of the delegations of nations that come to me, I found that Romans were fortunate due to their coherent unity, great power, multiple cities, and solid structure. It also had a religion that clarified the Halal (lawful) and Haram (forbidden); stopped their fools; and reconditioned their ignorant ones. In addition, I deemed that India had some of that with regard to its wisdom and medicine with its multiple rivers and fruits, as well as its wonderful craft, good trees and large number of people. Likewise, China is similar to them in respect to its unity, many kinds of craftsmanship, horsemanship, diligent work regarding war machines and iron industry. In addition, it had a kingdom gathering its people. As for Arabs, I saw no good characteristic of them neither regarding religion, worldly affairs, firmness, nor strength; although their humiliation, indignity, and discouragement is evident through their status living with repulsive beasts and wavering birds killing their children because of privation, and eating each other due to need. They were the furthest from the delicious food, clothes, drinks, amusement and pleasures of life. The best food that has ever tasted by the sybarite of them was the meat of camels that many wild beasts did not like to eat because of its hard texture, bad taste and the fear of getting a disease. If any Arab hosted a guest, he considered it an honor. Shall he served a meal, he considered it an advantage. It is said in their poems, and boasted by their men. Thus, I do not see you humble to your humiliation, indignity, privation, and misery, you are, rather, proud and desire to have higher ranks than others”.