In the memoirs of the chief of the Aghas: Murad V’s wife used her lover for rehabilitation Vengeance within the Ottoman Palace 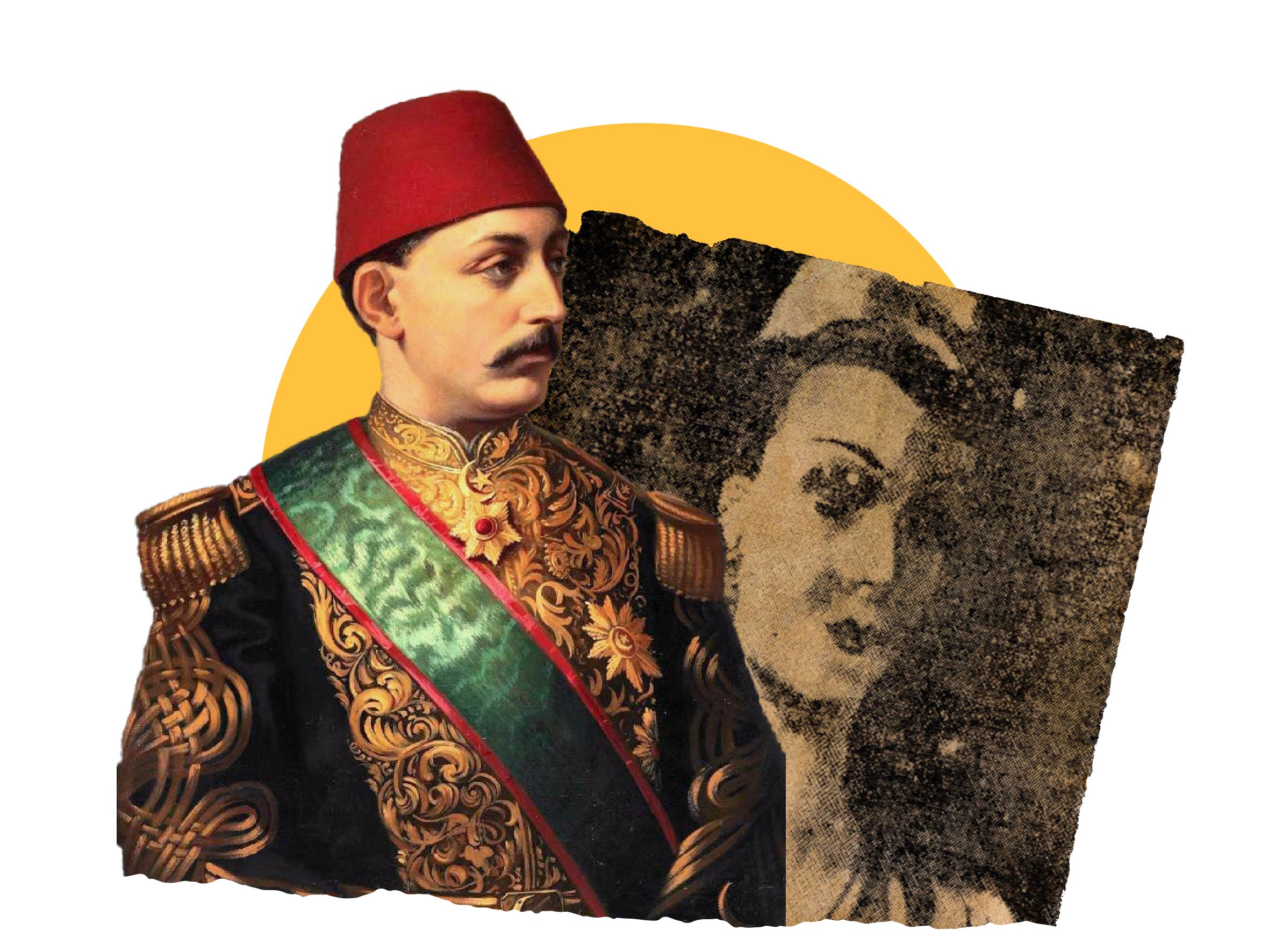 In the memoirs of the chief of the Aghas: Murad V's wife used her lover for rehabilitation

Vengeance within the Ottoman Palace

Historians were not mistaken when they considered the memoirs of Khairuddin Agha, the chief of the Aghas during the reign of the Ottoman Sultan Abdul Hamid II (1876-1909), as a valuable treasure and a decisive historical document.

The memoirs not only revealed what was hidden from those who tried to unravel the mystery of the Ottoman palaces, which were shrouded in secrecy and ambiguity by the Turkish sultans; they even killed everyone who tried to know anything, but also monitored what was behind the locked doors, such as love stories between the Turkish sultans and some of the maidservants, it even revealed that one of the stories almost got Sultan Murad V killed, a situation that trembled the entire Ottoman house.

Khairuddin Agha narrates the story from the beginning, so he says that the conspiracy began during the reign of Sultan Abdul Aziz I, who ruled from 1830 to 1876, and his son was Prince Murad, who would later become Sultan Murad V.

As for the details of that conspiracy, it goes back to the fact that Prince Murad was fond of women and western dancing, which was the reason he used to frequently hit one of the night-clubs at that time, known as the “Orian Club”, where he met a Belgian woman called Nellie Hopkins, an employee at the Belgian embassy who work in the profession of Journalism, and she was beautiful and attractive.

Who is that “Belgian girl” who made Murad V abandon his wife?!

As goes the habit of the Ottoman family, the prince panted after the woman for her he fell, this matter went public, so tongues were gossiping about it, and people talked about the new relationship between the Ottoman prince and the foreign girl, which eventually reached “Berto Sultan”, Prince Murad’s wife at that time.

The wife was not better than her husband, and as the Arabic proverb says, “Birds of a feather flock together.” At first, Berto Sultan submitted a petition to Sultan Abdul Aziz to subdue his son, but he did not consider this petition, especially since Sultan Abdul Aziz I did not love his son, Prince Murad, but – as Khairuddin Agha narrates – he wanted to humiliate his son in order to prevent him from ascending the throne.

This refusal by Sultan Abdul Aziz, prompted Berto Sultan, to seek the assistance of her old lover, Hasan Al- Jirksy, the prominent officer of the Ottoman Guard, and this man loved Berto Sultan before her marriage to Prince Murad, but she refused him.

Berto Sultan’s idea to get rid of her husband’s mistress was for Hasan Al-Jirksi to make that girl fall in love with him so that she deserts Prince Murad. She already summoned one of the Aghas and asked him to invite Hasan Bey, even though intermingling of strangers with the women of the palace was prohibited and whoever violates the laws shall be put to death.

But Berto Sultan did not care and started pulling the strings behind the Ottoman Sultan Abdul Aziz, and her husband, Prince Murad, where she already met him in the middle of the night, using the cheapest women’s tricks to convince him, so she flirted with him and promised him that whatever he desires shall come true, while realizing that Hasan Jirksi desires no-one but her.

The ball is now in the court of Hasan al-Jirksi, he knows that he is defying the Ottoman Sultan Abdul Aziz, and realizes that Prince Murad’s wife is coveted by him, but he ignored all that for the sake of the ultimate prize to win Berto Sultan. Such actions, delivers an image of what kind of men the Ottomans were counting on in running the affairs of ruling and army.

Hasan Al-Jirksi began his plan, so he went to the “Orian Club” and was caught by Nelly Hopkins’s beauty, he was able to make her fall in love with him until she left the grand palace with him, which Prince Murad had prepared for her.

Prince Murad went mad when he knew that the girl had abandoned him. He could not spend a day without picturing her, neglecting all the governance issues, he even sent his spies to find out the truth behind this desertion until he found out that she lives with Hasan Bey al-Jirksi; at this moment, Prince Murad found himself in great confusion, because he realizes the great position that Hasan al-Jirksi reached with his father, Sultan Abdul-Aziz, and even when the latter knew about the matter, he was pleased afterwards, that this love story of Prince Murad and the foreign girl was closed as it started affecting the reputation of the Ottoman family, so Sultan Abdul Aziz did nothing but granting the title of Pasha to Hasan al-Jirksi, as a sign of his satisfaction and joy with what he did.

Prince Murad never gave in to that outcome. As for the palace, it is only preoccupied by the story of the prince and the mistress; Maidservants are talking, and the Ottoman Sultan Abdul Aziz is busy monitoring his son, and Prince Murad is looking for revenge, but the parish, important decisions and people’s lives are nothing to these sordid desires.

Prince Murad’s first move came by summoning three of those who were close to him and assigned them to take revenge on Hasan al-Jirksi, who became Pasha. As for al-Jirksi himself, he tried to contact Berto Sultan again, in order to submit herself to him as she promised, but she tossed him out and told him through a delegate that he had taken the reward by granting him the title of Pasha and would not give him more than that.

When Hasan al-Jirksi received this response, he threatened Berto Sultan to reveal everything if she did not accept to meet with him, and he would return the Belgian girl to her husband; the one who carried the messages between them was Abram Agha, and Berto Sultan did not find any escape from this meeting and informed Hasan Pasha to prepare for their meeting without anybody noticing.

As night raiders, Berto Sultan hid, to meet her lover in his house, which coincided with the movement of the three men who were ordered by Prince Murad to take revenge on Hasan al-Jirksi and his mistress.

Hasan Pasha was preparing to spend the night of his life; he prepared everything and dismissed the servants. At the same time, Prince Murad’s spies were waiting for the arrival of the Belgian girl, Nellie Hopkins, to pounce on her. When Sultana Berto Sultan’s cart, driven by Abram Agha, arrived, the spies witnessed a closed cart with a woman, they thought it was the Belgian girl, so they jumped on Abram Agha and killed him and they wounded Berto Sultan deeply, then tried to drag the cart, but they were down on their luck when one of the horses fell, and the cart stopped moving, and Berto Sultan screamed, so the spies felt they were compromised and feared that Hasan Pasha would raid them with his servants; thus, they tried to escape.

The sultan’s spies who killed his wife instead of his mistress.

As for Hasan Pasha, when he heard this scream, he rushed only to be surprised by the scene of men attacking his beloved where he tried to chase them, but they escaped; he was preoccupied with Berto Sultan thereafter, who was found unconscious, so he carried her on the cart and took her to the clinic of Dr.Hasan Awni, one of the doctors of the Royal Palace, and came up with this pretension that a group of criminals had attacked one of the princesses of the royal house, and he happened to pass by, so he ran to rescue her, but she was dying.

But the doctor, Hasan Awni, as soon as he laid his eyes on her, knew that she is the wife of Prince Murad, so he was surprised and tried to save her, but it was pointless. With her dying breath, she rose up and said, “Hasan Pasha, why did you kill me?”. She was referring to Al-Jirksi, whom she thought had sent these men to her, in retaliation for not fulfilling her part of the deal.

The doctor, Hasan Awni, heard those only words before Berto Sultan death. As for Hasan Al-Jirksi, when he saw that his beloved has passed away, he could not speak a word, and after attempts to push him to talk, he said: I did not mean the princess, but her husband, and I thought he was in the cart, so I attacked her; he chose not to tarnish her reputation in exchange for framing himself for this charge, a charge that is punishable by hanging.

Hasan Al-Jirksi added that he wanted to kill Prince Murad because he deprived him of his beloved and he was referring to the Belgian girl, Nelly Hopkins, to be detained thereafter; the Ottoman Sultan Abdul Aziz came running to find out about this conspiracy that threatened the pillars of Ottoman rule, to such an extent of attempting to assassinate an Ottoman prince who, after a few years, would become Sultan and ruler of the country, Hasan al-Jirksi confessed to Sultan Abdul Aziz that he tried to kill Murad because of the Belgian girl, but he was not plotting against the Ottoman family.

With such scandal, the Ottoman Sultan Abdul Aziz ordered to conceal everything that had happened and summoned Ismail Shawqi Pasha, one of his leaders, and ordered him to get rid of Hasan Pasha and he carried out this order and killed the man. As for the Belgian girl, Nelly Hopkins, she was deported outside the country on the orders of the Sultan.