Indirectly caused the invaders of the Arabian Peninsula to leave in (1840) The Europeans saved the Ottomans in “London” after their governor in Egypt turned against them. 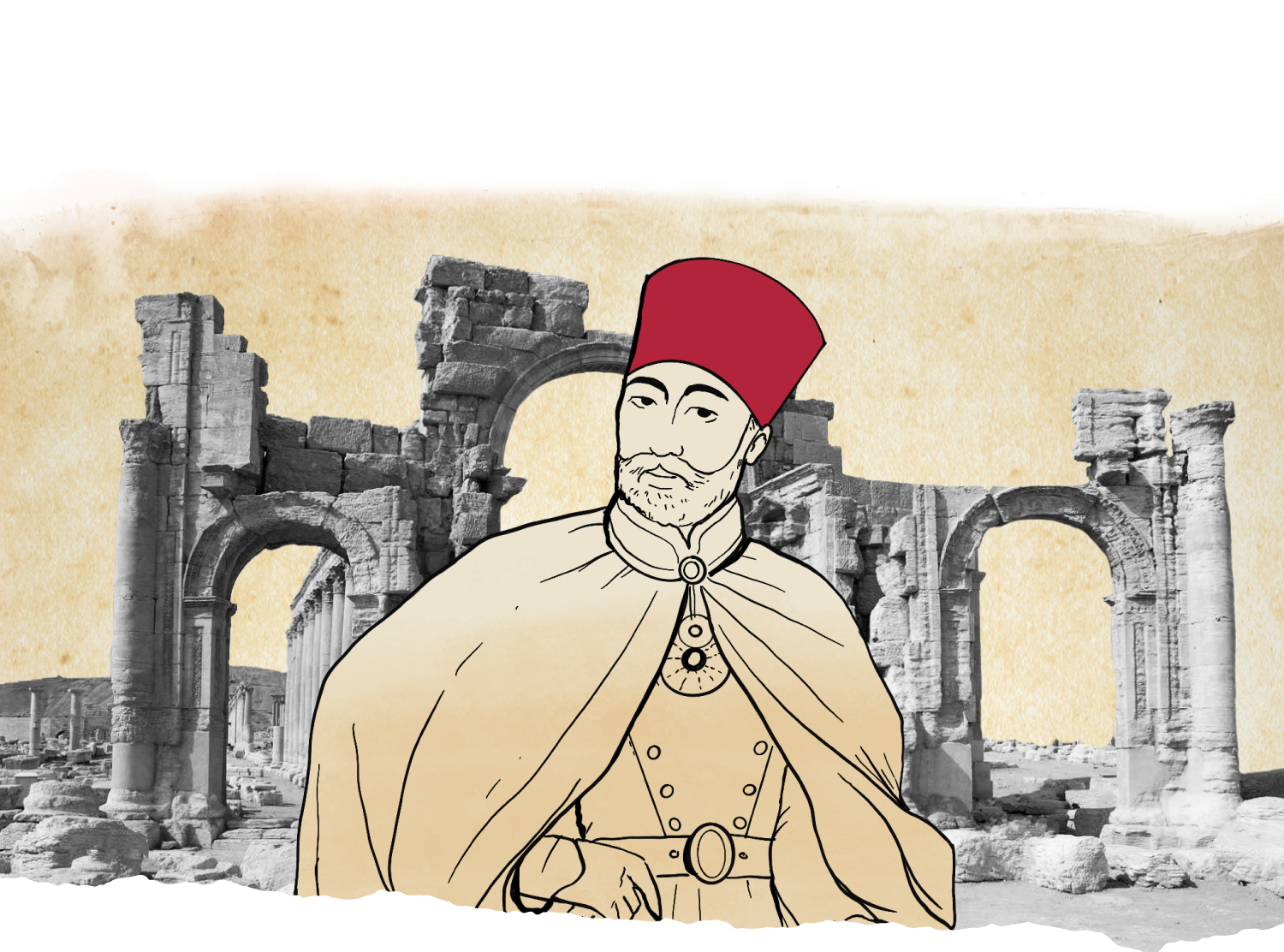 The Europeans saved the Ottomans in "London" after their governor in Egypt turned against them.

The Ottoman governor of Egypt – Muhammad Ali Pasha – was a mere politician got overwhelmed by his dream to control the entire Arab East, or perhaps the entire Ottoman Sultanate, especially since his Ottoman masters surreptitiously came to the East, stole the Arab World and kidnapped the last of the Abbasid Caliphs to take away their legitimate right over the lands.

Muhammad Ali Pasha, who campaigned on the Arabian Peninsula, believed that he had taken over the Saudi state with all its territories that extended to the Arabian Sea in the east, and all the coast of the Red Sea in the west and the two holy cities. His ambition went too far to the Indian Ocean, to be a match for the British Empire, which was then in control of the high seas.

The Pasha became so obsessed with the idea of controlling the world’s trade routes, and he went too far to believe that he has the ability to control the Arabian Peninsula, including the Two Holy Mosques.

The ambitions of the Ottoman governor expanded and grew even further, based on the approach of the Ottoman sultans to dominate the distant provinces through semi-independent governors, who exerted their hegemony on them, and manipulated them by making internal alliances, controlling centers of power, and making coups and striking them together.

Istanbul sensed a lot of the ambitions of the Pasha, the governor of Egypt, but it did not want to lose him, both of them needed the other, and the Ottomans did not find another to confront the resurgent Saudi state that fell in (1818), and they took advantage of the strength of the Saudis and their toughness, which they were aware of, in order to limit his power, after their governor in Iraq tried to fight them and lost, and their governor in the Levant refused to get involved in the Ottoman Campaigns in Diriyah.

The Ottomans exerted their control over their governors in the Arab world by manipulating through coups and supporting various powers.

The Pasha responded and was not aware that these sultan orders aimed to limit his forces and drain his money and forces. It is true that the Ottomans sent recruits to him and provided him with weapons, but as usual they took all the credit.

Following the temporary occupation of parts of the Arabian Peninsula by the Ottomans through their governor, Muhammad Ali Pasha, the Pasha’s ambition headed south, seeking to occupy Sudan and add it to his kingdom. After things were settled for him, the Ottoman Sultan Mahmud II, who was busy with his pleasures, found that a major revolution was about to topple the state of Greece, so he marched his already collapsed forces, and after the failure of his army, he asked his governor in Egypt for help and intervention, and the Pasha’s plan was a quick response to prove his importance, and he had what sought for, he almost made won had it not been for the intervention of the European countries represented by the Russians, the English and the French, and the subsequent losses almost ravaged the rule of the Pasha, who found that it was time to separate his policies from the Ottoman Sultan, and to declare his retreat and return to Egypt.

In that war, the governor of Egypt lost about thirty thousand of his soldiers, and lost most of his naval fleet, after the fatal blow inflicted by the European coalition on the Egyptian and Ottoman fleets in the naval battle of Nafarin in (1827), so Muhammad Ali Pasha refrained from continuing to confront the Europeans, and the remnants of his destroyed fleet returned. to Alexandria.

Muhammad Ali Pasha expected that the Ottomans would appreciate his great services in his war on the Arabian Peninsula, after the victories of the Saudis that humiliated the Ottomans, especially after the Saudis recovered the Two Holy Mosques from the Turkish Ottoman occupation, and in Greece, where the Sultanate’s army was humiliated, but Istanbul’s sense of the danger of Muhammad Ali Pasha pushed it to marginalize and diminish his role, to the extent that the Sultan granted the Pasha only the Greek island of Crete, which the Pasha found an insult, after he expected to obtain major territories such as the Levant.

Due to its nature and geography, the Levant was a natural barrier between the Turks of Anatolia and the Arab world, its importance escalated and became an arena of bloody conflict since the occupation of the Arab world by the Ottomans. Therefore, Muhammad Ali Pasha planned to add the Levant to his state, against the will of his Ottoman sultan, in order to gain its economic resources and the craftsmanship of its people. The weakness of the Ottoman state after its defeat in the Greek war then the Russian war in (1829) and the occurrence of many revolutions and strikes within the Sultanate, helped Muhammed Ali to achieve that, as confirmed by historical resources, not to mentioned that Muhammed Ali managed to have Bashir Shihabi, the chief prince of Lebanon, to his side.

The forces of the governor of Egypt were able to achieve unprecedented victories in the Levant, so they took control over Gaza, Jaffa, Haifa, Tyre, Sidon, Beirut and Tripoli. The Ottoman Empire’s attempts to stop the advance of their governor failed, so the Ottomans mobilized twenty thousand fighters and marched to face him. The two armies met in the plain of agriculture near Homs in April (1832), and defeated his sultanate in the fortified Acre, Damascus, and Homs. This battle is one of the most significant battles of Muhammad’s army. Ali Pasha as it was the first battle in which his army fought against the Turks face to face, and demonstrated the superiority of his modern army.

After this battle, the army of Muhammad Ali advanced and occupied Hama and Aleppo, defeated the Ottomans in the battle of Bilan, crossed the northern borders of Syria, and Ibrahim Pasha managed to enter with his forces the state of Adana in Anatolia.

The state of Adana was the key to Anatolia. Sultan Mahmud II was facing defeats. He prepared a new army of 53 thousand fighters, led by the Grand Vizier “Muhammad Rashid Pasha.” A ferocious battle took place between the two sides, in which the governor, Muhammad Ali Pasha was victories, the most important of which was the Konya battle on December 21 (1832), which opened the path before him to Istanbul, the capital of the Ottoman Empire, as it became so close to be controlled by the Pasha.

Many believed of the great disagreement between the Europeans and the Ottomans, the truth is, they preferred them over others, and the victories of Egypt under the leadership of Muhammad Ali constituted a great concern in Europe, especially after opening the way for his armies to set out for Istanbul, in addition to the strength of the Egyptian naval army, which is What constituted a grave danger to Europeans in the future.

The Europeans rushed to the aid of the Ottoman Empire, and began to emboldened them to face of Muhammad Ali Pasha, announcing the start of a mediation completely biased to the Ottomans not based on the Pasha’s victories on land, and resulted in the so-called Treaty of London.

The Europeans sided with the Ottomans against Muhammad Ali, rejecting any attempt at independence from the Sultanate.

Britain expressly – declared – its absolute hostility to the Ottoman governor, Muhammad Ali, and declared the need to preserve the Sultanate, and Muhammad Ali’s treaty from Syria; as his presence there means his control of the Mediterranean Sea.

The English prepared the policy and alliances necessary for the Ottomans to restore the territories of their Sultanate. The English ambassador, accompanied by some European ambassadors in Istanbul, submitted a memorandum to the Grand Vizier on July 27, 1839, requesting, on behalf of the five countries, Austria, Russia, England, France and Russia, not to carry out anything regarding Muhammad Ali, except with their knowledge and agreement.

The states’ memorandum to the Grand Vizier annulled the results of the Battle of Nusaybin in which the Ottomans were defeated by their governor, and that was considered a victory from England’s point of view, as for the Ottomans, this memorandum put them under tutelage of European countries, and thus lost their actual independence.

The Ottomans agreed to the only way out that the Europeans delivered for them on July 15, 1840. The treaty stipulated the expulsion of Muhammad Ali Pasha from Syria and the appointment of Muhammad Ali Pasha to rule Egypt, by the Sultan, which means that Egypt has no independence from the Ottoman Empire. The terms of the treaty were as follows:

First: Muhammad Ali and his successors shall be allowed to rule Egypt hereditary, and as long as he lives, to rule the southern region of Syria known as the state of Acre, including the city of Acre itself and its castle, provided that he accepts these conditions within a period not exceeding ten days from the date of his notification of this decision, and that his acceptance accompanies the evacuation of his soldiers from the island of Crete and the Arabian Peninsula, and the province of Adana and the rest of the Ottoman countries except for the state of Acre, and to return to Turkey its fleet.

Second: If he does not accept this decision within a period of ten days, he shall be forbidden from setting a foot in the state of Acre, and he shall be given a period of another ten days to accept the hereditary ruling of Egypt, withdraw his soldiers from all the Ottoman countries and to return the Ottoman fleet, if this period expires without accepting these conditions, the Sultan is free to deprive him of the state of Egypt.

Third: Muhammad Ali Pasha shall pay an annual tribute to the Grand Vizier, in proportion to the countries that are entrusted to him.

Fourth: Acre shall be ruled in accordance with the treaty concluded by the Ottoman Empire and the laws thereof, and Muhammad Ali and his successors shall be responsible for collecting taxes in the name of the sultan, to pay the tribute, and to undertake expenditures on the military and civil administration in the countries they rule.

Fifth: Egypt’s land and sea forces shall be part of the forces of the Ottoman Empire, and are intended to serve it.

Sixth: In the event that Muhammad Ali Pasha’s refuses these conditions, the Allies will ensure that they resort to means of force to implement them. In this context, England and Austria pledge to take, in the name of the Allies, at the request of the Ottoman Sultan, all means necessary to cut off the communications between Egypt and Syria, including the arrival of supplies from one to the other, and to support the Ottoman subjects who wanted to renounce obedience to the Egyptian government and return to the Ottoman rule, and to provide them with all possible assistance.

Seventh: If Muhammad Ali does not comply with the presented conditions, and marches his land and sea forces to Istanbul, the Allies pledge to take, at the request of the Sultan, all means necessary to protect his throne and make his capital safe from all aggression.

Certainly, these conditions were humiliating, accordingly they were rejected by Muhammad Ali Pasha, as he was the victor over the Ottomans, but the Europeans preferred the Ottomans over others, to enable them to control the Arab world, contrary to what some say that the Europeans brought back the Ottomans, it was all a matter of interests, but they all agreed that the Arabs shall not be independent, especially in that era of history.