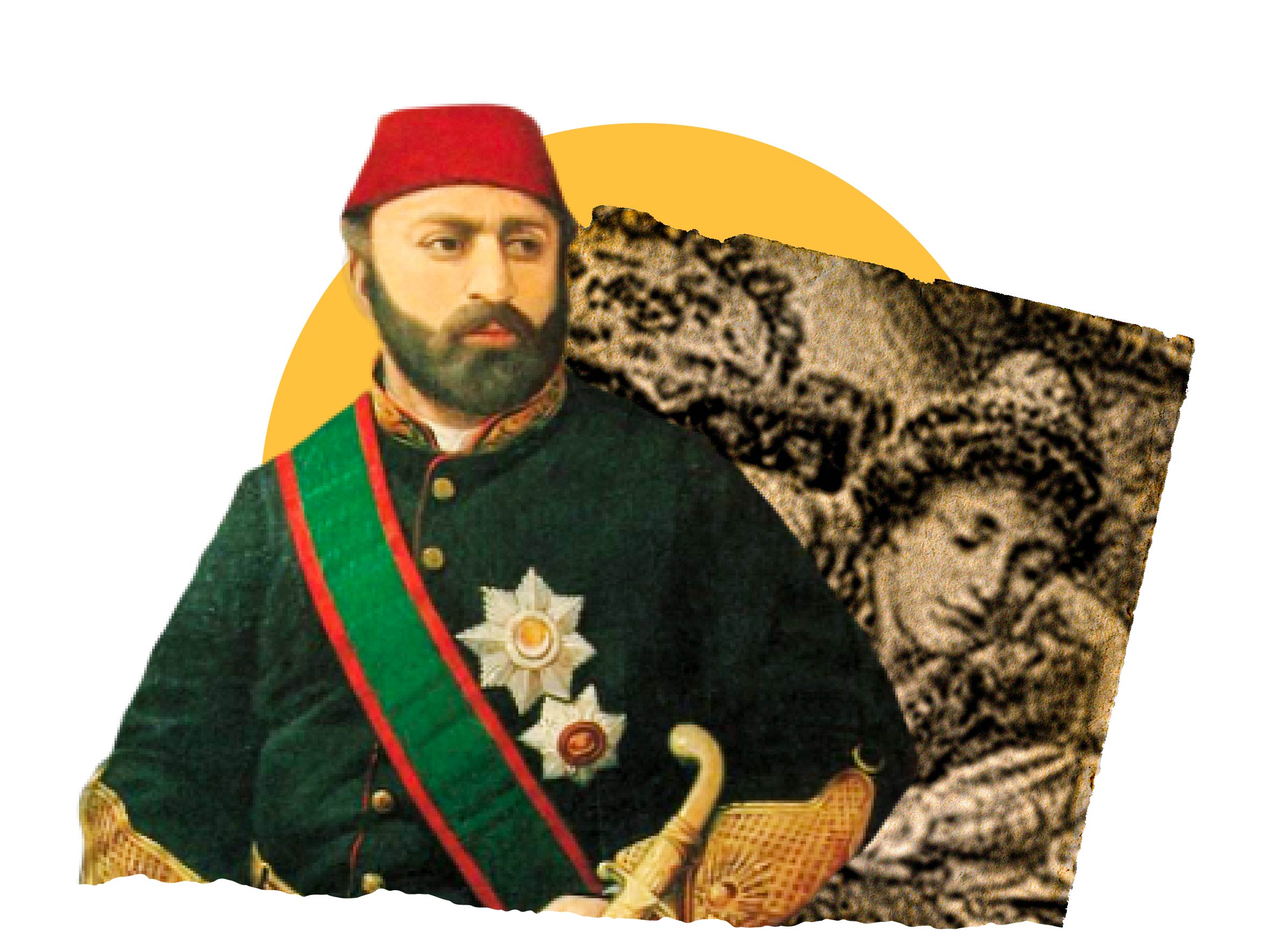 a maidservant who stole Sultan Abdul Aziz's heart away

It is the story of injustice repeated at any time and in any place whatsoever. An innocent girl, blessed with beauty from God, dreams of a bright future and a pure heart, and a white knight to kidnap her. Suddenly, everything turns into a nightmare, she finds herself in the hands of a tyrant who cares about nothing but devouring her flesh and putting her in a cage so that nobody can lay an eye on her but him. At that moment, her beauty turned into a curse, and history narrates a new story of the injustice of the tyrants.

Since the emergence of the Ottoman sultans and domination of the country and people, history has not stopped writing stories of injustice that filled volumes, and their enslavement of people, which became an example of immorality of the Ottoman family.

Abdul Aziz I was not different from his ancestors; as Suleiman the Magnificent fell in love with “Roxlana” until he neglects the armies and sat next to her writing poetry, this happened again with Sultan Abdul Aziz I, who was fascinated by the maidservant Feriha Khanum, who had an emotional relationship with Hasan Bey before Abdul Aziz I stepped in and exile this lover to Yemen to be alone with his beloved.

There is no love without freedom, a rule that was ignored by the Turkish sultans; that beautiful girl who fell in love and dreamed of having a small house and a family, suddenly found herself inside the sultan’s palace after her lover left her forcibly, all colors are in blues; a prison, no matter how wide, one still feels so squeezed; according to the enslaving Ottoman protocols, Feriha Khanum became a property of Abdul Aziz I, who, despite all his influence and authority, knew from within that she had no love for him, and like any oppressor who realizes that he has no control over hearts, his love turned into insane jealousy and constant skepticism, as if he says if she is not mine, then she is not for anyone else.

Khairuddin Agha introduces us to the details of that relationship, in which he was one of the parties thereafter, and says that at his early time in the Ottoman palaces he was carrying a message to Feriha Khanum; suddenly he saw a prestigious man shouting loudly, “Where is the man”, and Feriha confirms that there is no man, The man then directed his question to Khairuddin, warning him from lying, and insisting that there was a strange man who was hidden; Khairuddin told him that he had not seen any man, and he was just a messenger carrying a message to Feriha Khanum.

Sultan Abdul Aziz did not rest until he sent a message to the Ottoman governor in Yemen to make sure that his rival was still in Yemen, as Sultan Abdul Aziz had sent the man away to Yemen so that Feriha Khanum would forget him.

Abdulaziz was under hallucinations, and imagined men with his beloved.

This cinematic scene was not the only one that summarizes the story of Abdul Aziz I with Feriha Khanum. Khairuddin Agha reveals in his memoirs “the Secrets of the Haremlik in the Ottoman Court”, that after the former incident, Abdul Aziz I wanted to appease Feriha Khanum, so he held her an exorbitant royal party, that drained the resources of Muslims. Many public figures were invited to the party; in Khairuddin Agha’s words, the goal of the party was not only to appease Feriha Khanum, but to “force all the women of the palace to pay their respect to her.

Like the tales of One Thousand and One Nights, in the same party, another surprising incident occurred, the hero of which is suspicion. The eye of Sultan Abdul Aziz I, who does always watch out for Feriha Khanum, noticed during the party, hundreds of dancers and guests that “Feriha Khanum” did not wear her medal, which was always hanging on her neck day and night. Suddenly, blood started to boil in the veins; the sultan rose up like a madman babbling silently that his beloved had given that present to Hasan Bey who was in exile at this time!

Situation escalated further, and the Ottoman palace was turned upside down, as he left the affairs of the parish, governance, armies, and securing the country. The most important thing is to find the medal so that the Sultan calms down, and not to feel that someone has slapped him, and here comes the role of Khairuddin Agha, who has a strong relationship with Feriha Khanum, who found him a good Agha; during the search process that was assigned to all the workers in the palace, Khairuddin Agha found the medal, but inside it was a picture of Hasan Bey, her former lover. This is how love survive despite the oppression of the Turkish sultans.

Feriha Khanum kept her lover's picture despite the Sultan's love for her.

The crisis heated up, and the Sultan’s suspicions that someone had slapped him was confirmed; at this moment, Feriha Khanum stepped in and made a deal with Khairuddin Agha by replacing the medal with one that does not have a picture of Hasan Bey, which is what happened and the medal was arranged to be found again by a coincidence in front of the palace workers.

The plan executed by Khairuddin Agha succeeded and Sultan Abdul Aziz I fell for it; he even apologized to Feriha Khanum and tried to appease her in every possible way and promised her to hit all her enemies mercilessly, asking her to decide the punishment she wants.

What was revealed in the memoirs by Khairuddin Agha is nothing but a live model inside the Ottoman palaces; a sultan is insanely suspicious, a maidservant who does not love her sultan and conspires to save herself after she was deprived of her lover and imprisoned in the palaces of the Ottoman family, conspiracies carried out by the Aghas; this lifestyle has been repeated a lot with different names and details, but there is no doubt that hatred prevailed in the palaces of the Ottoman family and deception was the lifestyle of those in the palace, as for the subjects, they were out of the equation.