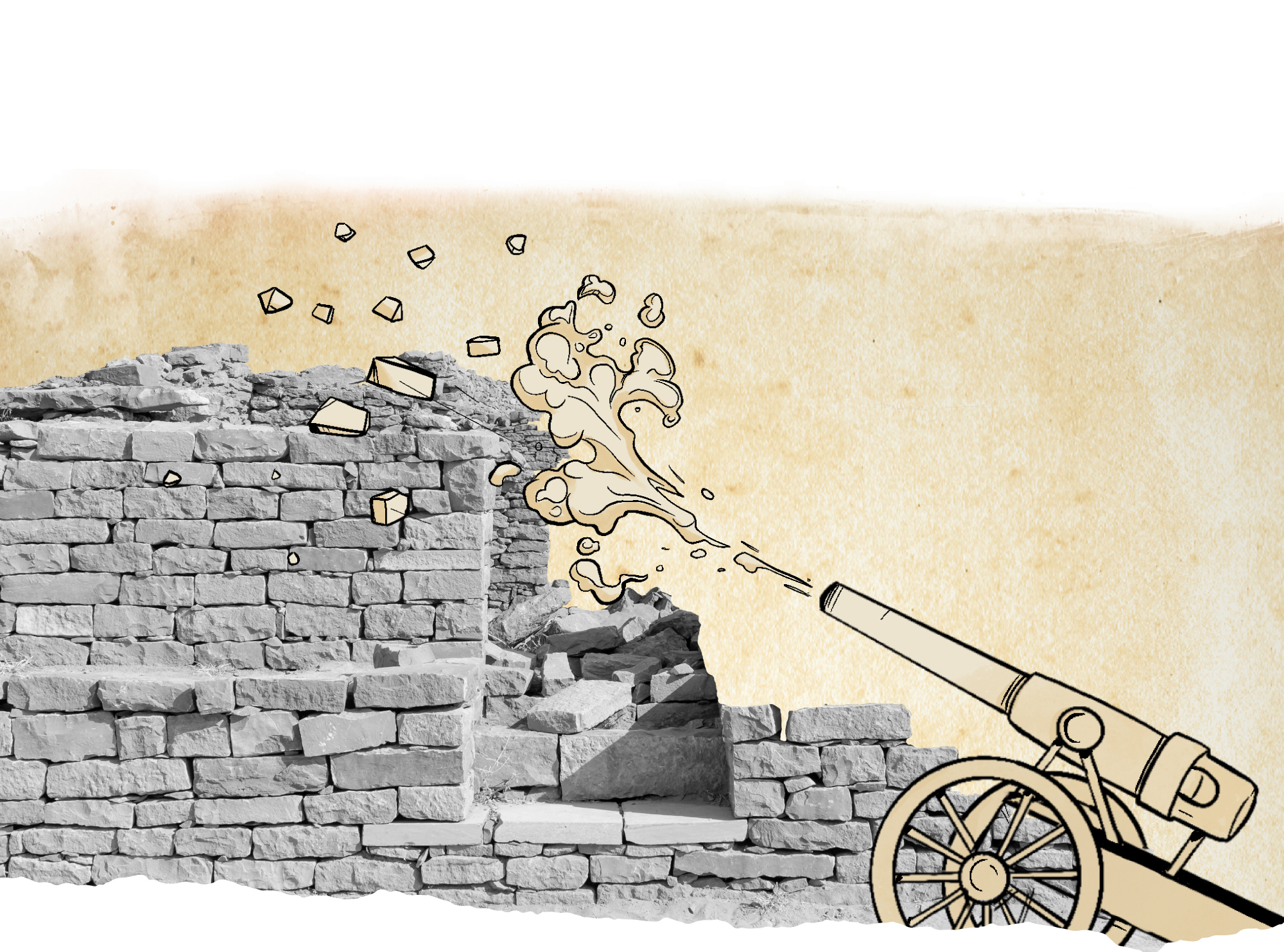 The Crimes of Ottomans in the Eternal “Dhurma”

Ottoman governor in Egypt, Mohammed Ali, and his invading forces were not satisfied with overthrowing Hijaz during the era of the first Saudi state; rather, he decided to eliminate the Saudi state once and forever. In order to achieve this, he sent a campaign led by his son Ibrahim Pasha, after the failure of his son, Ahmed Toson. The new campaign came with more than eight thousand soldiers of different mercenary elements and nationalities. It also included some French officers, and a number of Italian doctors.

In their second campaign, regiments of invaders arrived in Hijaz in October (1816). Meanwhile, when Imam Abdullah Bin Saud Al- Saud (the last Imam of the first Saudi state) became aware of the news of the arrival of Ibrahim Pasha campaign and its movement to Najd, he gathered his forces and headed to repel the invaders. Before Ibrahim penetrated into Qassim, he had clashed with his forces in several military confrontations.

With the resistance shown by Saudis against Ottoman forces supported and connected to its supply lines, the way to the Saudi capital, Diriyah, was not as easy as Ibrahim Pasha and his army had thought. Saudi fronts were defending with full force and ferocity; such as, Unaizah, Al- Rass, Shaqra, and other countries. The first confrontation of those invading forces was in Al- Rass town which showed honorable steadfastness for nearly four months, during which the invading forces lost more than two thousand and four hundred killed persons. After neutralizing it by reconciliation, most of the cities in Qassim were toppled as Ibrahim Pasha headed to towards Al- Washm province.

Imam Abdullah bin Saud tactically retreated to Diriyah, in order to fortify and defend it. As for Ibrahim Pasha, he advanced to Shaqra on his way to Diriyah which he besieged and attacked its walls with cannons. This led to the demolition of some sides of the wall. This ended by making peace after he had cut half or more of its palms.

Saudi historian, Ibn Bishr, has mentioned in the history he wrote about Imam Abdullah that, “he ordered Saud Bin Abdullah Bin Mohammed Bin Saud along with several men of the people of Diriyah, in addition to others, he ordered everyone to march to Dhurma and enter it to give assistance and support to its people. Thus, they marched to it and entered it”.

Such an order from Imam shows that he sensed the situation seriousness after the topple of most of Al- Washm province and the importance of the town of Dhurma as the first line of defense of the capital of Diriyah which is located near to the foot of the western Jabal Tuwaiq. It is about sixty miles to the west far from Diriyah. Therefore, Imam Abdullah has sent military support to it. A French historian, Felix Mangan, indicated to this saying, “before Ibrahim Pasha headed to Diriyah, he thought that it was appropriate to seize Dhurma; in addition, he had received confirmations that he would find abundant supplies there”.

In addition, Saudi historian, Mohammed Al- Fakhri, said about Ibrahim Pasha in Dhurma, “then, he marched and went to Dhurma which he fought and plundered by force. Pasha killed some of its people in homes, roads, and mosques. It was said that he killed twelve hundred persons of its native people, as well as fifty of those who were not native. He plundered the whole town, then, he took women and offspring who were there to Diriyah. They were about three thousands or more.

It seems that the news was too bad for Fakhri that he could only say, “Praise be to Allah in everything”. On the other hand, we find that “Ibn Bashir” elaborated on describing what happened to the people of Dhurma with the barbarian invading Turkish army saying, “Then, when Pasha and Turkish soldiers arrived near the town of Dhurma, a number of horses were ridden about the town which was measured. They knew the place where they had settled along with their firebrands, cannons, and shells. Then, they went back to their camp. In the morning of the fourteenth of Rabiʽ Al-Thani, Pasha came to the country, and encamped to its east near the palaces of Al- Muzahmiyya between that place and the town. They settled their luggage and sat up their tents. After that, soldiers marched with firebrands, cannons, and shells. They took them to the north of the town near the wall. Thus, war erupted between Turks and its people. Pasha kept successively shooting them in an unequaled war. In addition, Allah gave bravery to the people of the town to withstand without caring about him. He asked them to reconcile but they refused and did not accept to be disgraced by him”. He added, “No town was stronger in those aspects, except for Diriyah, than this town in respect of men, money, number of people, and equipment, however, Allah does what he intends.  Soldiers of Turks were mobilized against them, and they made a gap in the wall with firebrands and cannons but it was in vain. Then, they mobilized Turks as well; brought firebrands near the wall; and fought it in a great massive war. It was said to me that between the last Maghrib and Isha, there was five thousand and seven hundred shots including firebrands, cannons, and shells, thus, they demolished their near side of the wall”.

The Ottomans targeted Muhammad Ali by having him in stand-off with the Saudis to exhaust both parties, and devote themselves to whoever lasts.

Ibn Bishr continues saying, “then, Pasha pushed Turks against them but the people of the town remained withstanding there. After that, Turks attacked them in one campaign but they resisted them; sincerely fought them with swords; killed about five hundred men of them; made them retreat to their Pasha; and built some of the demolished parts of the wall. When Pasha saw their patience and sincere fighting, he ordered to prepare some firebrands and sent them to the south of the town. War, fighting and shooting were successive from Turks against the people of the town in the first place; as well as all the helping people of the town and those who took up positions opposite them at the destroyed wall in the face of firebrands and shells”.

Ibn Bishr went on describing such situation from which the town of Dhurma has suffered, as well as the injustice, abuse, assault, and excessive brutality that were perpetrated by Turks against them, and that was shameful to humanity, saying, “Turks entered the town from every side; took it over by force; and killed its people in markets, roads and homes. The people of the town had fought them with swords in the middle of the town until the sun rose. They killed many of the Turks but Turks deceived them by showing safety. It was said to me that they went to people at homes and to assembled gangs saying you are safe, then, they took their weapons; killed them; and plundered everything included in the town such as, money, goods, weapons, clothing, livestock, horses, etc.. Some men of the town and others fled to wilderness. People were either survivors or killed while the town was left empty of its people…”.

Saudis have withstood the cannons and bombs of Ottomans until they demolished the walls.

What was said by Ibn Bishr is approved by Felix Mangan, the French man, who pictured to us the tragic scene of Ottoman criminality that Dhurma and its people have lived saying, “the victorious Ibrahim Pasha, who was confronted by a resistance which he did not expect, ordered the soldiers to completely eliminate the people of the town. He commanded them not to let anyone alive. Soldiers immediately implemented the order of their commander. Once Turks, who were eager to pillage and plunder, defeated the last defenders of the town, they entered it and implemented the will of their commander quicker than they are when they are asked to attack. They assailed the people profusely shooting them; entered homes; and killed their people. They have accomplished this in less than two hours leaving only few hundreds of women and children whose lives were spared by the pity of soldiers. Those poor victims used to see in front of their eyes the bodies of their fathers, brothers, and husbands mingled with each other… Blood was flowing in the streets which were filled with the dead people. This was the punishment which Ibrahim Pasha inflicted on the people living in Dhurma who wanted to stand against him…”.

Looking at these scenes pictured by contemporary historians of the eternal Dhurma battle, one becomes aware of the meaning of withstanding and death defiance for the sake of homeland and its defense. He also becomes aware of the extent of malice and abjection showed by the invading Ottomans who lacked humanity axioms and mercy meanings.