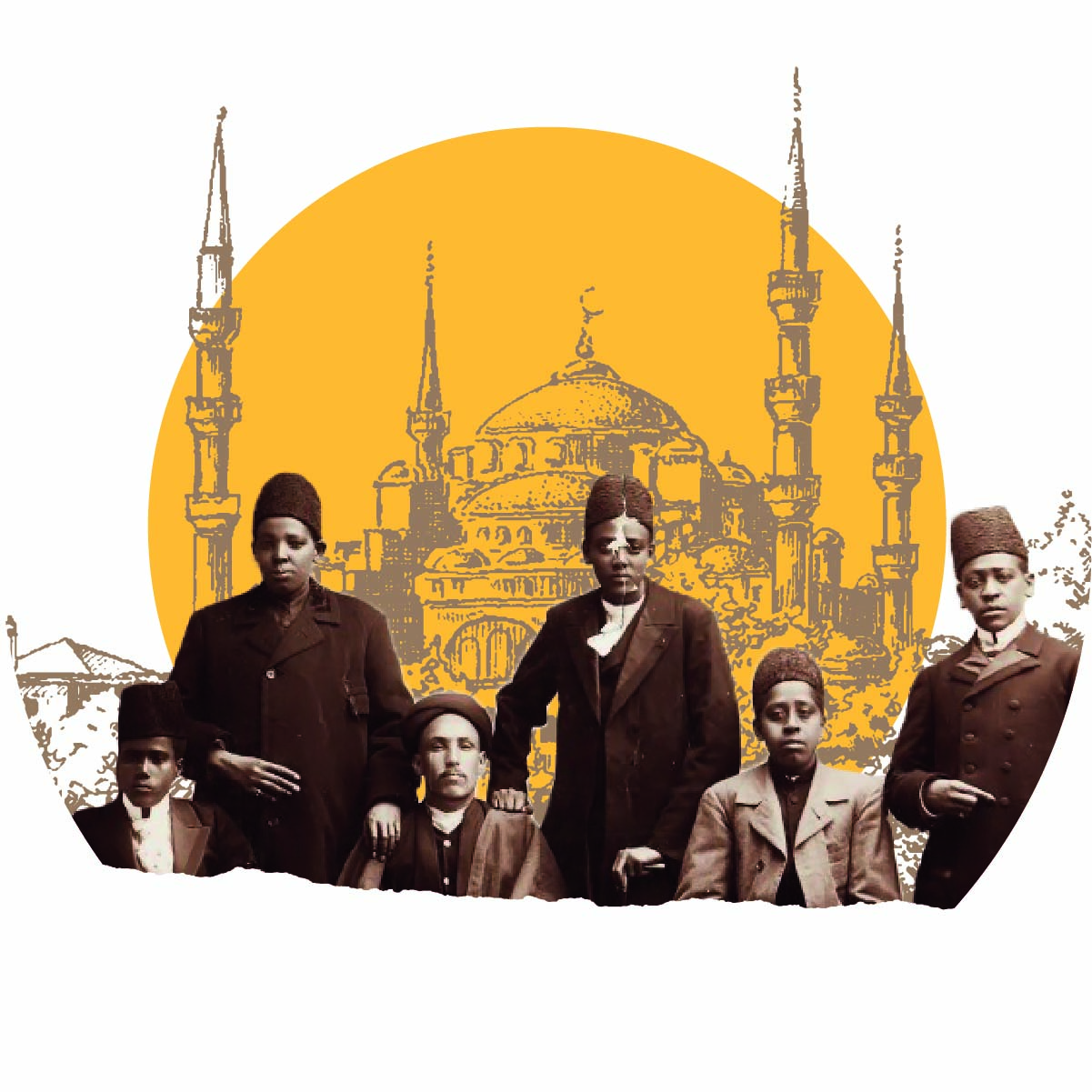 They have deprived the children of their normal lives

with the Sultan's harem and were insulted and belittled

The Ottomans mastered the multiplicity of institutions of slavery. The military class of Janissaries was one of the finest classes, to which the Ottomans were keen on supporting for being an important supporter of slavery. The state used to take them as a tax in most of the non-Muslim families in Europe, with ages ranging from 7-14 years, so that they would be enrolled and trained for soldiering professionally.

Many historians have agreed that the Janissaries are a group of young men, boys, homeless people, orphans, and Christian captives. The Ottoman Empire adopted and benefited from them, and brought them up on Islamic religious foundations, on the condition that they believe that the Sultan is their master and that they are his slaves. The Janissaries are fed by what is known as the Devşirme “Boys’ Tax”, where the Ottomans issued a law according to which one-fifth of the children of each occupied city were taken and included in the Ottoman army without a legitimate right allowing this act in Islam.

The Ottoman Empire exercised immoral acts in enslaving people and depriving children of their most basic rights to enjoy the protection of their fathers and mothers. This is considered one of the most heinous human crimes. The Janissary army considered these children as captives of the war that they fought with the Byzantine state and the Christian kingdoms in Eastern Europe. The matter has evolved into forcibly taking the boys to be a periodic tax that the state collects from the Christians in Eastern Europe, and it is called the Devşirme tax.

They opposed the emancipation of Islam to slaves by regularly codifying child slavery.

This tax is a crime against humanity, and an evidence to be added to the facts of history that the Ottomans who claimed Islam have a black history that humanity cannot forget. The Prophet Muhammad, may God bless him and grant him peace, denounced one of his companions in the story of the bird, “Who made that bird mourn the loss of its son … brought her son back to her”. If a small bird has the right of affection and assembly, then what about the person whom Allah created to be free and generous, to live with dignity, not to accept oppression or submissiveness?

As for the Ağas “Chiefs of Servants”, the Ottoman Empire adopted a system of castration against them in the palaces of the sultans, despite the fact that Islamic Sharia prohibits the principle of castration. The state’s adoption of this illegal system was one of the cases in which it went against Islamic Sharia. The Prophet Muhammad prohibited castration of people, so he said: “There is no castration in Islam,” Al-Albani corrected it.

The Ottomans were not satisfied with the castrated men, but rather they bought eunuch slaves from outside the borders of the state, where the castration process was carried out for the slave at a young age, to be sold in the slave market to kings and princes. The castration of slaves and selling them for service in the palaces of kings of various countries was a common business. There were two sects of eunuchs: black eunuchs, who were fully castrated, and white eunuchs, who were partially castrated. The white chief was called (Qabu Agassi). The chief of the black eunuchs, who was at the same time the supreme chief in the royal palaces, was called the (Qizler Agassi), meaning the (Chief of Girls), and (the chief of the House of Happiness). The state has put in place special regulations that apply to their service in the royal palaces.

The idea of castration is a pernicious idea, because of the enslavement and oppression it contains. If castration was the only crime of the Ottomans, it would have been sufficient to convict them of the heinous violation of human rights and their enslavement. The castration process that they were carrying out, and their view of the man and the woman, indicates the complexes and problems inside them, and reveals the fear that they possess over their women from the men who serve their palaces. The Ottomans ruled by conspiracy, and they dominated with brutality and women were their game, and gold is their last target behind all the countries that they controlled.

The feminist environment was rife with intrigue. These eunuchs lived in the royal harem palaces, and the word (harem) – commonly used in the Ottoman dark ages – was indicative of the feminine domination against the sultans and princes of Ottomans. The women in their palaces were of the greatest importance, and they were practicing the hidden role of Ottoman politics. The conflict between the harem of the palaces increases the authoritarian atmosphere prevailing, until very strange stories overflowed with this conflict and the accompanying intrigues and plots being hatched in the Ottoman palaces. If the walls could tell what was happening inside these palaces of immorality and decay, it would tell horrors & dreadful stories.

The eunuchs lived in harem palaces and were insulted and detracted from their dignity and freedom. They lived deprived of their normal instinct that Allah had created for them. They were deprived – because of castration – of true parenthood and the right to have children of their own to help them in old age.

They deprived the "eunuchs" from living a normal life and starting a family.

2. Hassan Al-Dika, The State of Muhammad Ali and the West, Acquisition and Independence (Beirut: The Arab Cultural Center, 1997).

4. Muhammad Marawan, “Janissaries, the Strength and Weakness of the Ottoman State,” (Libya: The Scientific Journal of the College of Education, University of Misurata, Volume 2, Issue 8, June 2017).